2023 is the Year of the Rabbit in the Chinese zodiac calendar. To mark it, an exhibition at the Zhejiang Nature Museum is displaying artifacts, specimens, paintings and historical documents related to rabbits.

The exhibition is divided into two sections ― zoology and culture.

The first section introduces Leporidae, including rabbits and hares. For centuries, Leporidae has been considered a part of Rodentia since they share many similarities. It wasn't until the 1970s when Chinese scientists discovered fossils of Mimotona, a genus of early insectivorous Lagomorph that lived in the late Paleocene period in China, that people started to classify rabbits and hares as Leporidae.

Today, there are 97 species of rabbits and hares living in the world. The exhibition includes dozens of specimens, including the arctic hare, Yarkand hare and Belgian rabbit.

Some rare species can only be found in China, for example, the Yarkand hares, which is specific to Tarim Basin in northwest China. Many local governments have built protected habitats and used artificial reproduction to bolster their numbers.

Ancient Chinese people began taming primitive rabbits and hares as early as 2,000 years ago. Historic archives show that people had already set up rabbit enclosures dating back to the Qin (221-206 BC) and Han (206 BC-AD 220) dynasties.

Ancient craftspeople from present-day Anhui Province found that cony fur was an ideal material to produce brush pens, which gradually developed into a regional handcraft. Such brush pens had found favor with scholars and were often selected as gifts to pay tribute to the royal family in the Tang Dynasty (AD 618-907).

In Chinese folklore, a rabbit accompanies Chang'e on the moon. Chang'e, the Chinese goddess of the moon, is the origin of the Mid-Autumn Festival. In the very distant past, Chang'e flew upward the heaven, choosing the moon as her home.

In 2013, China launched the third Chang'e spacecraft and landed on the moon, making China the third country in the world to achieve such a feat after the former Soviet Union and the United States.

The spacecraft also delivered the robotic rover Yutu (Jade Rabbit) to the lunar surface to begin its months-long mission. It performed the first lunar soft landing since the Russian Luna 24 mission in 1976.

Throughout the dynasties, the Jade Rabbit evolved into a symbol of the moon, then developing into an indispensable element in rituals worshipping the moon.

The exhibition introduces rabbit-related legends and displays handicrafts inspired by them.

Rabbit-shaped hats embroidered with colorful patterns are emblematic of the rabbit-loving tradition in China.

They have been popular among all walks of life during the Chinese New Year. People traditionally believe these hats ward off evil spirits and protect kids at the beginning of a new year.

In ancient China, rabbits were considered an auspicious animal that could bring longevity and offspring to people.

In northwest Shaanxi and Gansu provinces, rabbits have been associated with reproductive fitness. Rabbit-themed paper-cuts often decorate wedding ceremonies with the hopes of having more children.

Ancestors believed rabbits were the only creature beyond 500 years old with white fur. In their eyes, the white rabbit was a symbol of longevity. Therefore, this animal often appeared on handicrafts, daily vessels and ink-wash paintings, which reflect the ancient love felt for them.

Date: Through April 12 (closed on Mondays) 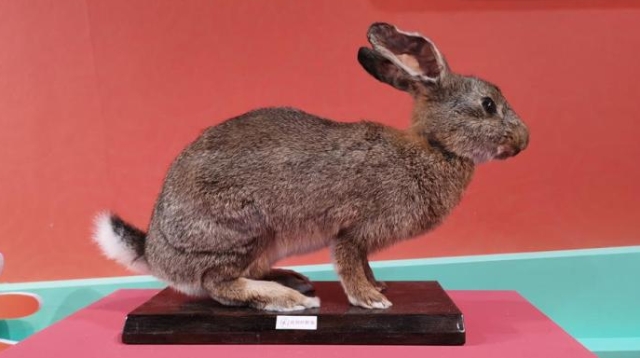