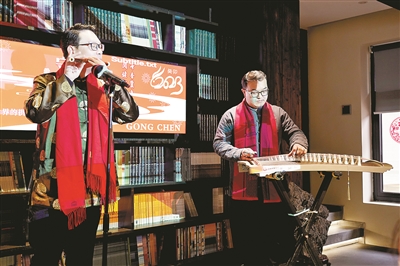 Chinese zither and flute ensemble livens up the festival atmosphere

As a folklore activity, the refined celebration of the Lunar New Year has been held annually along Gongchen Bridge across Hangzhou Section of Beijing-Hangzhou Grand Canal. This year is no exception.

The activity is officially started in Gongchen Academy on January 17. Residents from surrounding regions, representatives of merchants, security personnel and staff gather together to pray for blessings and ring in the New Year in the refined and elegant atmosphere.

On the first day of the activity, two old artists performed Chinese zither and flute ensemble to liven up the festival atmosphere with melodious music. The ensemble was followed by Storytelling Spring Outing of Dongpo in Vernacular of Song Dynasty and Recital Memory of Walking in Qiaoxi and other programs.

Different from previous years, this year’s activity is held at more sites and lasts longer. From January 17 to February 6, interactive refined activities, handicraft DIY and riddle guessing on lantern festival will be held along the canal. Citizens may watch opera, go to market fair and experience folk custom to jointly celebrate the Spring Festival along the Grand Canal.