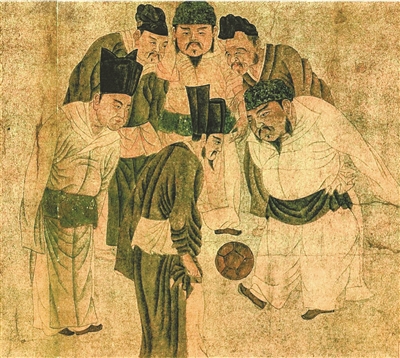 Emperor Taizu of the Song Dynasty Playing Cuju, original painting by Su Hanchen (The existing painting is the copy made in the Yuan Dynasty and is collected by Shanghai Museum.)

The World Cup Qatar has sparked a frenzy discussion on football, indicating that football is intriguing. Interestingly enough, football was welcome among people of Lin’an (present Hangzhou), the capital of the Southern Song Dynasty nearly 1,000 years ago. Back then people were keen on watching Cuju (known as football today) and cheering for the teams.

Cuju was originated in the Warring States Period and thrived in the Song Dynasty. As a nationwide popular sport in the Song Dynasty, Cuju became a pastime of many scholars. Poets, like Su Shi and Lu You, had depicted the scenes of Cuju in their poems.

Also, playing ball had been a way of socializing. People in the Song Dynasty often organized Cuju teams to play. Members made friends and formed a close relationship with each other through sports. According to the record, besides men’s Cuju teams, there were also women’s Cuju teams in the Song Dynasty. The Bronze Mirror with Patterns of Cuju in collection by the National Museum of China vividly records the scene of Cuju played by both women and men’s teams.