Aleksandar Djordjevic of Serbia, pictured during the 2017 EuroBasket final between Serbia and Slovenia, has been hired as the head coach of the Chinese men's national team. Djordjevic replaces Du Feng (right), who was at the helm on Monday as Team China sealed qualification for the FIBA 2023 Basketball World Cup finals. REUTERS/CHINA DAILY

Desperate to bounce back at next year's World Cup, the Chinese national basketball program has landed legendary Serbian coach Aleksandar Djordjevic to lead its men's squad to redemption at the FIBA showpiece.

Right after Team China secured an early entry into next year's World Cup finals, the Chinese Basketball Association announced on Wednesday it had hired one of the most accomplished names in the European game as the new head coach of the men's squad to replace Du Feng for next year's Cup campaign.

The appointment was made official after Du led Team China to an 80-67 overtime win over Bahrain in an Asian qualifier on Monday to book its ticket to the 2023 World Cup with two qualifying games to spare.

The hard-fought win, thanks to Chinese center Wang Zhelin's game-high 27 points and 14 rebounds, marked the end of a tough three-year stint for Du.

When he first took the reins in 2019, Du inherited a demoralized squad that had slumped to the country's worst-ever World Cup finish. That result saw the host nation lose Asia's only direct Olympic berth for Tokyo 2020 to Iran.

The arrival of Djordjevic, a proven success at international level with his native Serbia, is expected to help restore Team China's strength in time for the Paris 2024 Olympics with a fresh approach.

"To improve the overall competitiveness of the national program, the CBA has hired Aleksandar Djordjevic to be the head coach of the men's team. He will lead the program to compete at the final and sixth qualifying window for the 2023 World Cup to fight for a qualification quota for the 2024 Olympic tournament," said a CBA statement.

According to the CBA, Djordjevic will bring an assistant coach and a fitness trainer with him to China. They are due to arrive on Friday in Hangzhou and will begin assessing players when the CBA league resumes on Dec 6 in its bio-secure bubble in Zhuji, Zhejiang province.

The CBA paid tribute to Du and his coaching staff for their exceptional contribution to the national program over the past three years under particularly tough circumstances caused by the COVID-19 pandemic.

With almost no international drills, yet plenty of difficulties in logistics and health management of players amid the pandemic, Du faced a tall task in guiding Team China out of its slump after it missed out on the Olympics last year for the first time in history.

Now that he's done his part to bring the team back to quota contention for the next Games, Du took pride in his work and wished the team all the best for the future.

"Since the moment I took over at the end of 2019, it's been an extraordinary journey full of challenges and setbacks," Du said at Monday's post-match news conference.

"The support from the players, my coaching staff, the CBA and all the fans helped us pull through, pushing us to grow together. I appreciate that from the bottom of my heart.

"Hopefully, the team will keep coming back stronger at next year's World Cup and earn qualification back to the Olympics," said Du, a former Chinese national team forward.

Replacing Du frees the squad of his controversial selection decisions. He also coaches 11-time CBA champion the Guangdong Southern Tigers, and was at times accused of favoring players from that club.

The repeated use of three Guangdong guards — Zhao Rui, Xu Jie and Hu Mingxuan — during Team China's lackluster Asia Cup campaign, where it was eliminated by Lebanon in the quarterfinals in July, had triggered widespread criticism of Du's tactics. In his defense, those picks were apparently forced by the unavailability of players who were ruled out with COVID-19 symptoms.

Scheduled from Aug 25 to Sept 10, next year's World Cup will be co-hosted by the Philippines, Japan, and Indonesia, where the best performing team from Asia will automatically secure a direct quota to the Paris Olympics.

As one of basketball's most successful figures in Serbia, Djordjevic coached his national squad to silver medals at the inaugural edition of World Cup in 2014 (formerly known as the world championships), the 2016 Rio Olympics and the 2017 EuroBasket to become the first in his country to medal at all three major tournaments as both a coach and a player.

As a prolific guard in his prime, the 55-year-old native of Belgrade was a formidable member on the team that won three EuroBasket championships in 1991, 1995 and 1997, finished runner-up at the 1996 Olympics in Atlanta and won the worlds in 1998 in Greece.

After resigning from the Serbian national post following its fifth-place finish at the 2019 World Cup in China, Djordjevic helped Fenerbahce win the 2021-22 Turkish league championship. 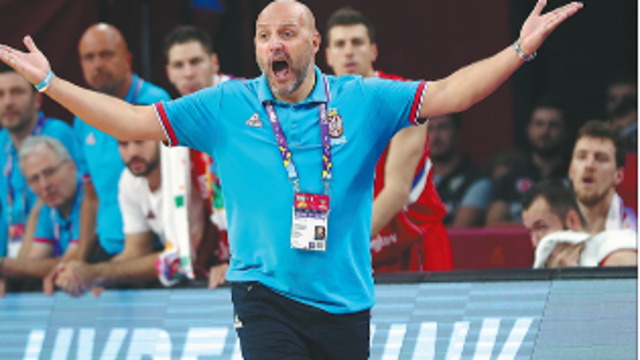