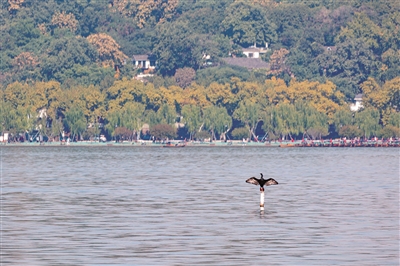 Migratory birds are moving in flocks, traveling long distances to Hangzhou to spend the coldest period of the year in the West Lake area.

The first flock of cormorants arrived in Hangzhou on Sept 17 this year.

Cormorants, which are said to be afraid of the cold temperature, are the first migratory birds to come every year, arriving at the end of September to the beginning of October, and leaving for their breeding grounds in the north somewhere between the end of the next March and the beginning of April.

How to distinguish the local birds from the migrators? The migrators are timid, wandering in the middle of the lake, and usually keep a distance from the shore where the local ducks flock together. They are also very organized and disciplined, acting in unison. In addition, the female mandarin ducks have grayish feathers and are slightly smaller in size.

More varieties of birds were spotted in the lake thanks to the improvement of the water quality and ecological environment protection.

According to the staff, the ecological restoration of the West Lake watershed strictly follows the principle of the minimum intervention. The construction process has been greatly optimized and innovated.