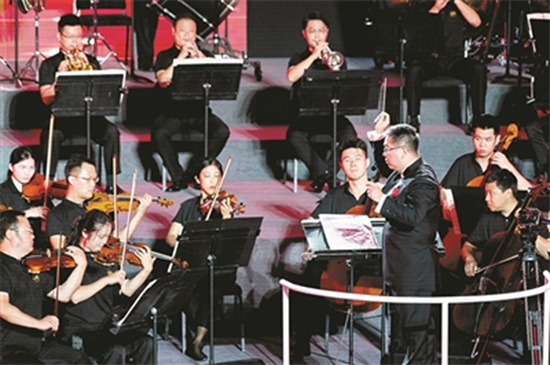 Hangzhou Philharmonic Orchestra performed at the CCTV China Dream · Ode to Motherland - 2022 National Day Special Program on the evening of October 1. The orchestra availed the opportunity to represent the charm of picturesque Jiangnan with melodious tones and show a creative host city of the Asian Games with modern symphony. The concert presented various types of music works in forms of symphony, folk music, etc. under the background of live scenes in Hangzhou so as to bring an immersive experience to audiences.

Hangzhou Philharmonic Orchestra started with Symphony Light of Asia to highlight the spirit of the Asian Games. As a special program of the National Day Holiday, Picturesque Jiangnan series concerts were performed under the background of live scenes in five cities, namely Beijing, Harbin, Hangzhou, Pu’er and Xi’an. The third stop was Hangzhou, and the concert with the theme of “travelling in 24 hours” unfolded the scroll of music recorded in a spacing of 24 hours, so as to make music flow in every corner of the city to fully display the cultural deposit of the fascinating city.