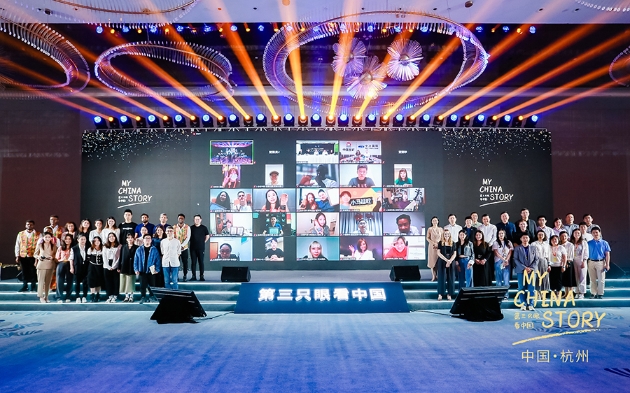 Scene of the award ceremony of the International Short Video Competition

The award ceremony of the Fourth My China Story International Short Video Competition 2022 organized by China International Communications Group (CICG) was held in Hangzhou yesterday. Sixteen entries contributed by Hangzhou, including Foreign Lad Showing You Around Picturesque Fuchun Resort and Iron Brother Sailing to the Future in Hangzhou, won the first, second and third prizes.

The competition, by narrating China stories through short videos from the perspectives of foreigners, aims to promote the authoritative brand of “videoing China by foreigners” and build an open platform for exchanges and communications among global creators. It is reported that a total of 65,000 short videos of various types from around the world were involved. After three rounds of reviews and appraisals by 22 professional judges from domestic and overseas TV & films, international communication and internet circles, finally, 72 award-winning works were selected; 71 institutions and individuals from 34 countries and regions comprehensively presented real China stories in various formats and from different dimensions.

With “Spectacular Asian Games & Exciting Hangzhou” as this year's theme, the annual competition has received a large number of outstanding works, which has effectively enhanced Hangzhou’s international reputation and displayed the brand-new image of the host city of the Asian Games. At the awarding ceremony, Joseph, a Pakistani scientist and one of the protagonists of Short Video Iron Brother Sailing to the Future in Hangzhou, said that Hangzhou was not only a good place for overseas study, but also his second hometown. He looked forward to seeing kabaddi (a traditional sport of Pakistan) in Hangzhou Asian Games next year.