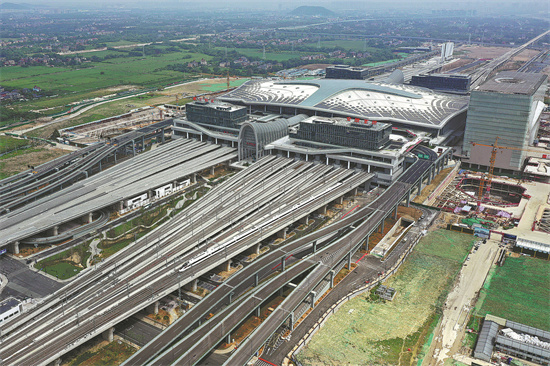 A train pulls out of Hangzhou West Railway Station in Hangzhou, Zhejiang province, on Thursday, as the Huzhou-Hangzhou section of the Hefei-Hangzhou High-speed Railway opens. [Photo by LI ZHONG/FOR CHINA DAILY]

The Huzhou-Hangzhou section of the Hefei-Hangzhou High-speed Railway opened on Thursday, and passengers were able to buy tickets online from 5 pm on Wednesday, according to the China Railway Shanghai Bureau Group.

It's an important supporting project for the upcoming Asian Games in Hangzhou and is expected to expand regional tourism resources and boost economic vitality, officials from the construction authorities said.

Among the stations, Hangzhou West, Fuyang West and Tonglu East are newly built, and were also put into operation on Thursday.

"The Huzhou-Hangzhou section connects the tourism resources west of Hangzhou with those in Huzhou, giving full play to the advantages of two traditional tourist cities, such as Taihu Lake in Huzhou, Mogan mountain in Deqing and West Lake in Hangzhou," said Cui Yonglu, head of marketing at Jiaxing Train Depot.

Hangzhou is the host city of the 19th Asian Games Hangzhou 2022 (postponed to 2023) and Huzhou is one of the co-host cities.

The railway line is an important supporting project for the Games and will provide convenience to passengers and athletes.

After the project is completed, it is expected to create an efficient transport network among Zhejiang, neighboring provinces and cities in the Yangtze River Delta region such as Shanghai.

"This railway line can promote the construction of one-hour-traffic circles in Zhejiang province and boost economic vitality along the line, especially tourism," said Li Yongqiang, manager of the overhead lines of the project department of China Railway Electrification Bureau Group.