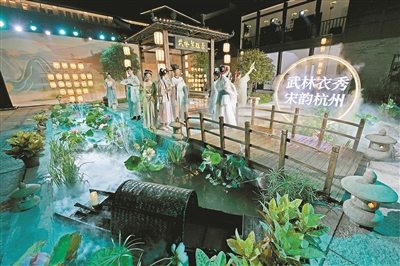 Wulin Road of Hangzhou, also known as Women's Street, officially reopened during the Double Seventh Festival on the 7th day of the 7th lunar month. After several months'renovation, Wulin Road and its surrounding landscapes have taken on a new look. In addition, AR technology was used to create a metaverse street. The Grand Show Celebrating the 20th Anniversary of Wulin Fashion Show & Opening Ceremony of Women's Street was also held at Wulin Square. Many Song elements were introduced in the show.

Starting from 2:00 am on August 5 (this Friday), the south section of Wulin Road (Jiaochang Road – Haier Lane Section) will be turned into the pedestrian street in the designated periods of time: 6:30 pm - 2:00 am during working days, and 24 hours a day during holidays and festivals (6:30 pm prior to the holiday - 2:00 am after the holiday).