Pheasant-tailed jacana is a national second-class protected wild animal in China. It is recently seen forging and breeding in the shallow waters of Beihu Lake in Yuhang, Hangzhou, East China's Zhejiang province.

Pheasant-tailed jacana has elongated toes and nails that enable it to walk on floating vegetation in shallow lakes. It migrates long distances and has different non-breeding and breeding plumages.

Its body is brown, its face is white, with golden feathers on the nape. The wings are white with a black border. In the non-breeding season, the top of the head and back are dark brown and only a trace of the golden nape feathers may be seen.

Pheasant-tailed jacanas feed on insects, mollusks, and other invertebrates on the water's surface. It forages by swimming or by walking on aquatic vegetation. 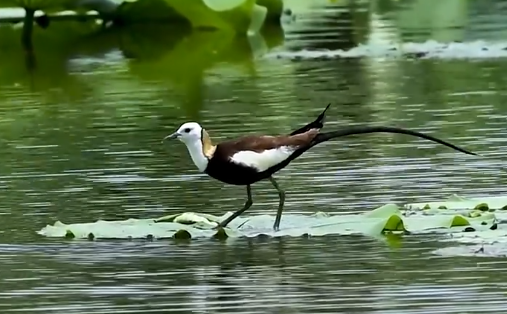