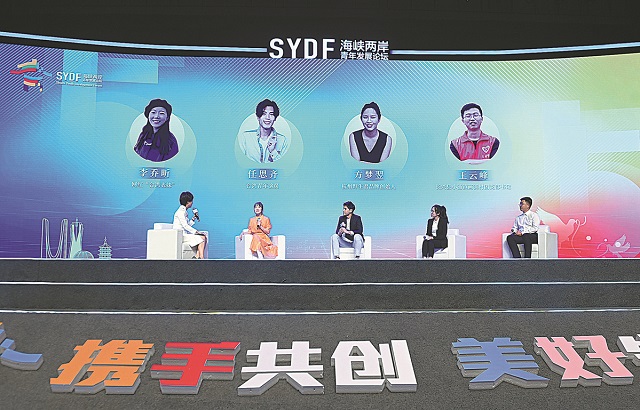 Young people from across the Taiwan Straits share their experiences during the fifth cross-Straits youth development forum in Hangzhou, East China's Zhejiang province, on May 11, 2022. [Photo by HU YUANYONG/FOR CHINA DAILY]

China's top political adviser Wang Yang on Wednesday called on young people in Taiwan to contribute to promoting the peaceful development of cross-Straits relations, advancing the process of reunification and realizing the rejuvenation of the Chinese nation.

Wang made the remarks in a letter expressing congratulations on behalf of the Communist Party of China Central Committee and Xi Jinping, general secretary of the CPC Central Committee, to the fifth cross-Straits youth development forum that was held on Wednesday in Hangzhou, Zhejiang province.

In his congratulatory letter, Wang, a member of the Standing Committee of the Political Bureau of the CPC Central Committee and chairman of the Chinese People's Political Consultative Conference National Committee, said the forum, which has overcome all sorts of negative factors, has shown the strong will of compatriots on both sides of the Taiwan Straits for exchanges and cooperation.

"We welcome more young people from Taiwan to come to the mainland to pursue their dreams and create a better life, and we are ready to create better conditions for them to participate in cross-Straits exchanges and cooperation," he said.

Wang said the situation across the Straits faces increasing uncertainties and instabilities, and "Taiwan independence" separatists remain the biggest threat to a better life for compatriots on both sides.

Hung Hsiu-chu, former chairwoman of the Chinese Kuomintang party who attended the forum, said cross-Straits integration is an irresistible historical trend and compatriots on both sides should further deepen understanding and strengthen cooperation.

About 450 people from both sides of the Straits participated in the forum, which featured speeches and exchanges among young people.

Zhu Fenglian, a spokeswoman for the State Council Taiwan Affairs Office, said in response to the recent debate about the popularity of a Taiwan fitness instructor among mainland netizens that many Taiwan compatriots are aware that the mainland has offered them unlimited possibilities for career development.

In April, Liu Keng-hung, a celebrity from Taiwan and his wife, who are stuck in Shanghai's ongoing quarantine, became a craze online due to their livestreams of strenuous exercise set to the music of Taiwan singer Jay Chou.

"Recently, Liu's livestream has attracted wide attention and millions of netizens have been exercising with the familiar music in the background, gaining health and happiness and feeling full of positive energy," Zhu said.

In recent years, the mainland has introduced a series of policies and measures to benefit Taiwan people and many young people in Taiwan have seized the opportunities on the mainland, she said.

They have developed in various industries, including education, rural vitalization, grassroots governance, medicine and health, she said. "A large number of young people in Taiwan are also working hard and pursuing their life ideals on the mainland."

The CPC has always cared about and supported the growth of young people, Zhu said, adding that in the future the mainland will create even better conditions and more platforms for young people across the Straits to get to know each other and develop together.