A meeting held to promote the 5th China-Arab States Expo for Merchants from Countries Along the Belt and Road was held in Yiwu, a city in East China's Zhejiang, on June 21.

During the event, Ningxia extended an invitation to merchants from countries and regions involved in the Belt and Road Initiative to attend the 5th China-Arab States Expo, scheduled to be held in Yinchuan, capital city of the autonomous region, from August 19 to 22.

The expo will meet the needs of international cooperation in the post-pandemic world; organize ten trade forums and investment promotion meetings in sectors such as the digital economy, energy, science, agriculture and tourism; and hold six themed exhibitions themed around clean energy, new materials, green foods, medicare and cross-border e-commerce.

Speaking at the gathering, Lai Jiao, vice-chairman of the people's government of Ningxia Hui autonomous region, gave an outline of Ningxia's economic and social development over recent years to the audience.

With the approval of the State Council, or China's cabinet, and co-organized by the Ministry of Commerce, the China Council for the Promotion of International Trade (CCPIT) and the people's government of Ningxia Hui autonomous region, the China-Arab States Expo has greatly strengthened the exchanges and cooperation between China and other countries, as well as regions involved in the Belt and Road Initiative on trade and investment. Since 2013, it has become a major platform for China and Arab countries to jointly promote the building of the Belt and Road initiative.

Statistics show that the China-Arab State Expo has attracted the attendance of over 20 leaders and about 280 officials at the ministerial level from China and other countries, plus more than 5,000 firms and individuals from home and abroad during the same period. In addition, a total of 936 cooperative projects have been signed at previous expos.

Those in attendance of the promotional meeting included Han Jie, deputy director-general of Zhejiang Department of Commerce, officials from Yiwu Municipal People's Government and relevant government departments, business representatives from Arab countries in Yiwu, entrepreneurs from Zhejiang and Ningxia, and news reporters.

There is a long history of exchanges between Ningxia and Zhejiang - especially Yiwu. Zhejiang was designated as a province with a themed exhibition area during the second China-Arab State Expo in 2015. Ningxia has exported a large number of talents specializing in the Arabic language to Yiwu over the past years and these people have become an important bridge for the two regions in terms of furthering their exchanges and trade cooperation.

Ningxia and Zhejiang will make full use of the upcoming 5th China-Arab States Expo to strengthen their trade exchanges and cooperation, expand their presence in Arab countries and other nations involved in the Belt and Road Initiative, accelerate their high-level opening-up and strive for high-quality development in the years to come. 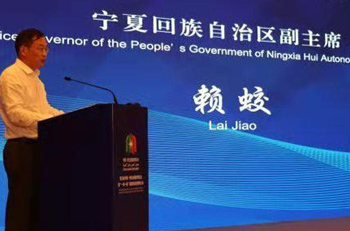