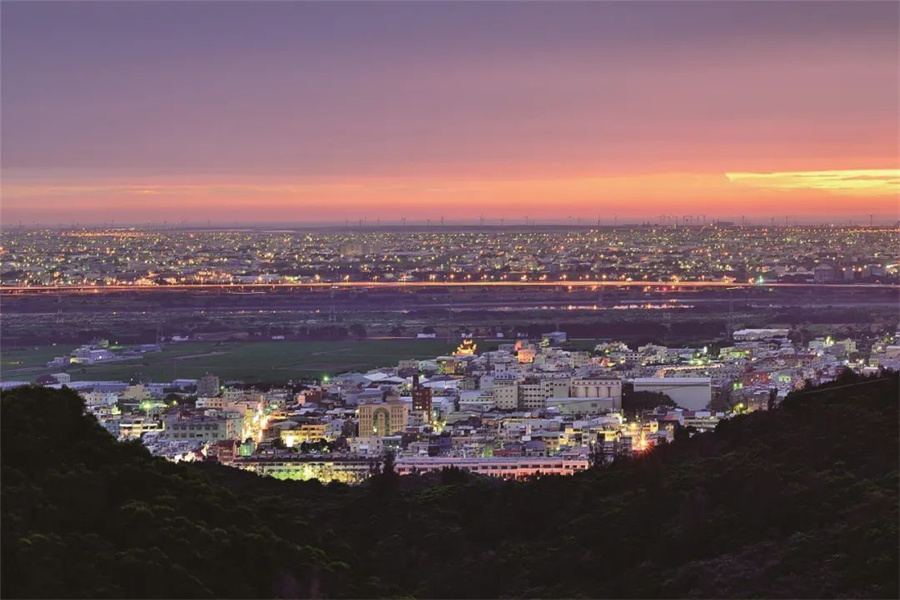 Dreamed Khujand as in the dreamy whispers.

The ancient city of Khujand in Tajikistan, on the border with Kyrgyzstan, is one of the oldest cities in Central Asia. The Syr Darya River flows through the urban area. Here you can find the ancient Sugdian castles, medieval white mosques and minarets. The ancient buildings have survived time, erosions and corrosions, still radiating the charming light of civilization along the Silk Road. 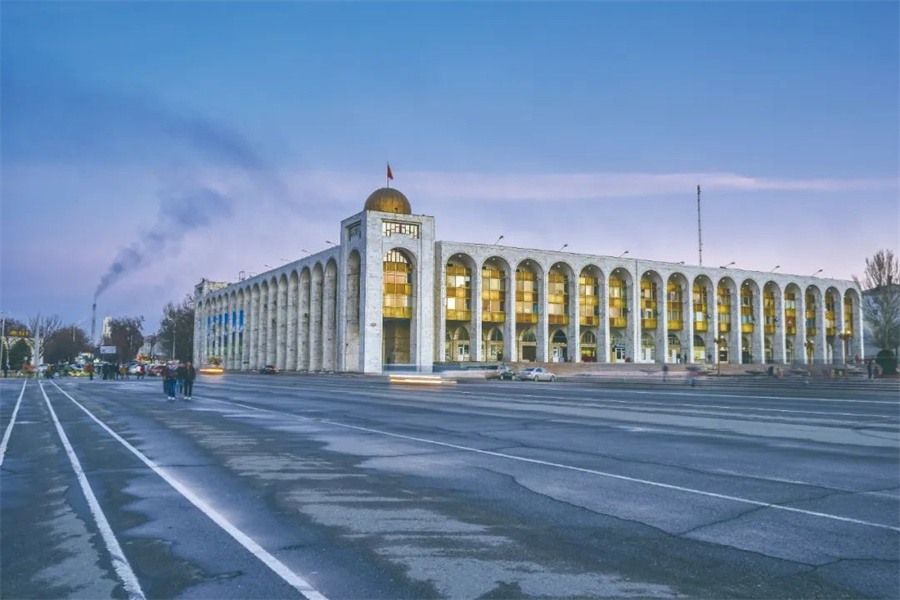 Khujand, a hub on the ancient trade route, helps us connect the modern sentiment for the Silk Road in two Central Asian countries. From here, reporters from Hangzhou 2022 set out to explore the cultural exchanges and mutual learning about sport between China and the two countries. 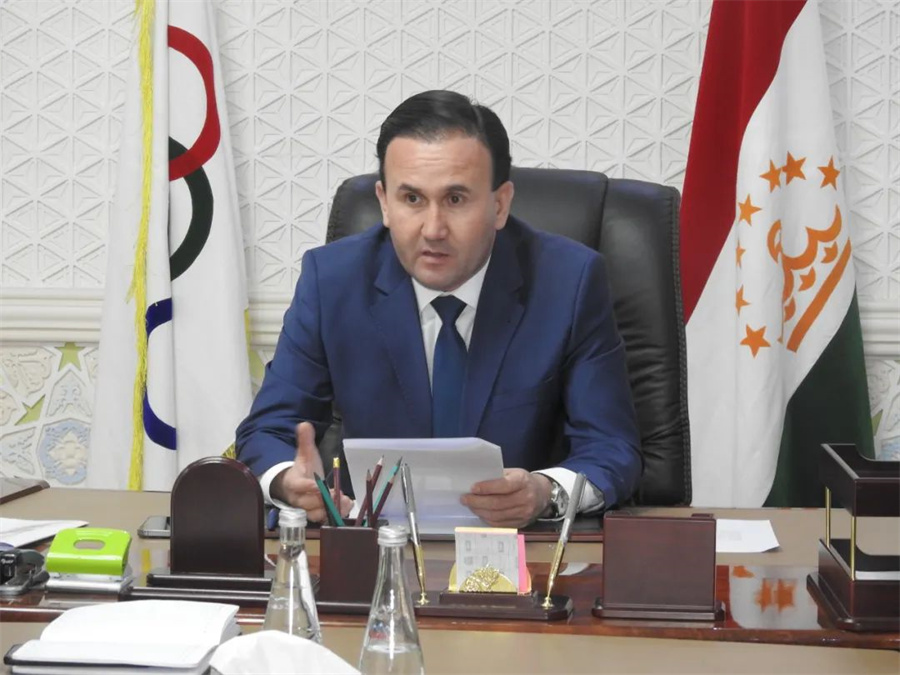 Vice President of the ARC of Tajikistan

Tajikistan is a land of mountains with abundant fresh water. Surrounded by the Pamir Plateau, it boasts the Syr Darya, Panj, Kofarnihon, Varzob, Surkhob and other small and medium rivers. In Tajikistan, you can experience four seasons at a time. From June to July, hailstorms can be observed in the south of the country, while in the centre of the country it is summer. In the valleys of Zarafshan, Rasht and Darvaz, it is spring time, yet in the foothills, it is winter. 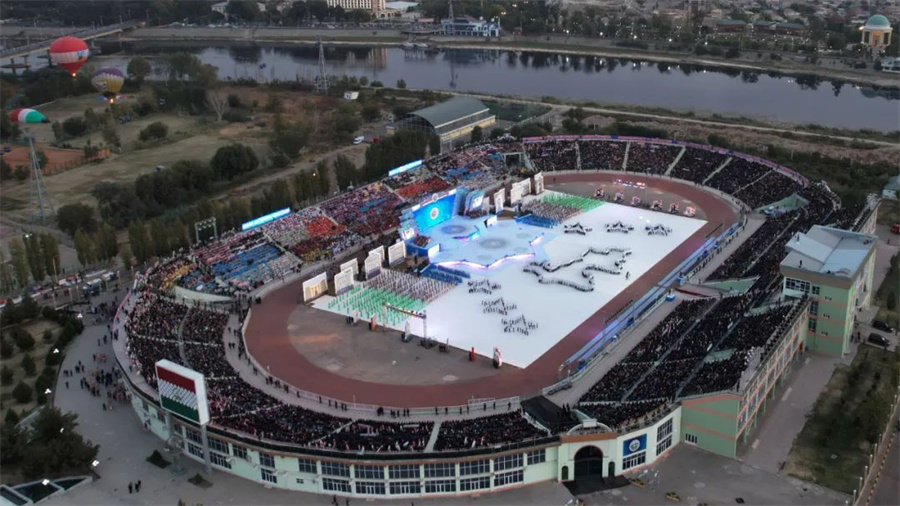 According to Rahmonzoda, Tajiks are cultured and civilized people. Folk crafts have been preserved to this day. People make a living from their craft. In Sughd, craftsmen make the best knives, in the south they make Chakan coats, which are recognized by UNESCO as an intangible cultural heritage of mankind. "Tajiks are known for their hospitality. In rural areas, every house must be a hotel. It is made especially for guests," said Rahmonzoda, "if you spend the night in any Tajikistan village, you will definitely find a place to spend the night for free."

The hospitable Tajik people are part of the cultural landscape along the ancient Silk Road, which branches out in three somewhat parallel routes traversing the entire country, connecting at the time Persia (now Iran), Greece, China and the Arab states. Here, Tajik ancestors were famous for their fast horses and two-humped camels, and tales of merchants on the old trade route are still told today. "Back to Khujand, this ancient city of Tajiks is developing year on year." According to Rahmonzoda, as a relic of an important town on the Silk Road, the Khuzhandi Castle built in the early days of the city, has been preserved after many restorations. There is one of the largest markets in Central Asia, the Bansham Bazaar, which welcomes an endless stream of tourists to relive the customs of the past Silk Road. 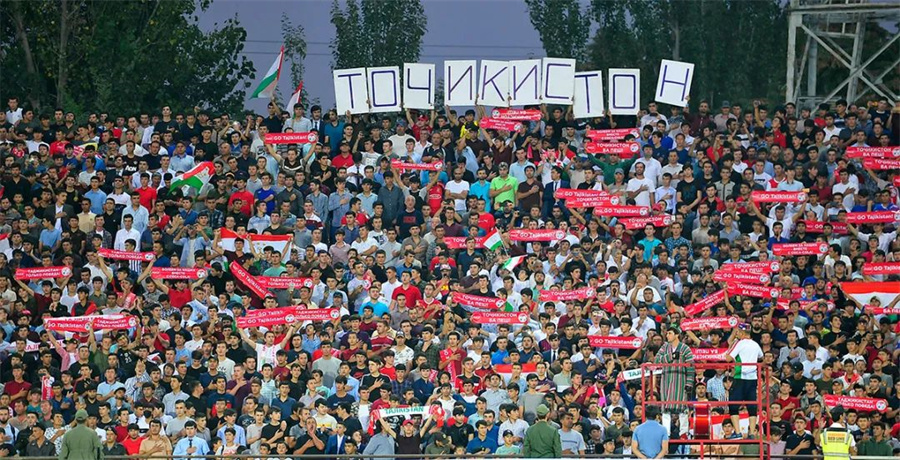 Sports in Tajikistan, like other sectors of the economy, are developing. It is reported that the President of the Republic of Tajikistan, the President of the National Olympic Committee of Tajikistan, and the Leader of the Nation, Emomali Rahmon pays special attention to sport and athletes. Over the last 30 years of independence, some 10,000 different sports facilities have been built in the country under the instructions of the President. At the initiative of the Head of State, the National Run is held annually on the third Sunday of May, and by another presidential decree Saturday was declared a day of health. In 2015, the Presidential Award of the Republic of Tajikistan was established for the winners and laureates of high-level international competitions. And now it is the 7th year that the winners and prize-winners of the world and Asian championships, the Olympic and Asian Games, as well as the World University Games are awarded with the President's prize.

"In the last few years, people have focused on professional sports. Today we have an Olympic standard universal sports complex in Dushanbe. Also, the construction of a football field with 30,000 seats is underway. There are plans to build an Olympic training center in Dushanbe," said Rahmonzoda. 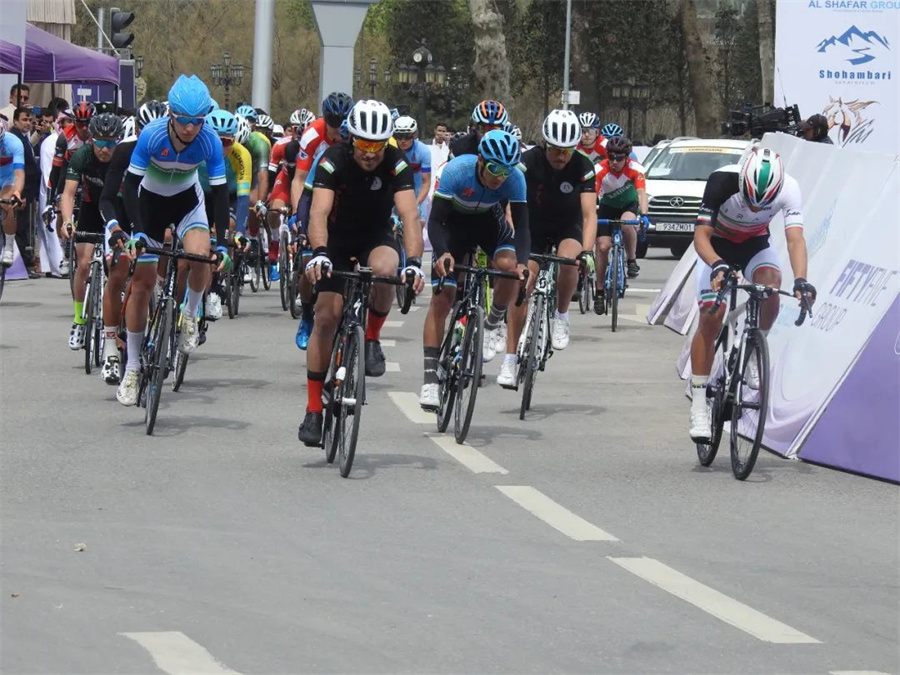 In 2022, Tajikistan, for the first time hosted the Asian Road Cycling Championship, the Asian Kurash Championship. Also, for several years, AFC qualifiers for men and women of different ages have been held in Tajikistan. The Fun Run and children's drawing competition for the Asian Games in Hangzhou are also listed into the schedule.

Expectations for greater harvest in the Hangzhou Games

China and Tajikistan have had friendly sporting exchanges all along. "In fact, our athletes won their first Olympic medals at the 2008 Beijing Olympics," said Rahmonzoda. In 2008, Rasul Bakiev won a bronze medal in judo and Yusuf Abdusalomov won a silver medal in wrestling. In addition, the President of Tajikistan President of the National Olympic Committee of Tajikistan, Emomali Rahmon attended the opening ceremony of the Beijing 2022 Olympic Winter Games. 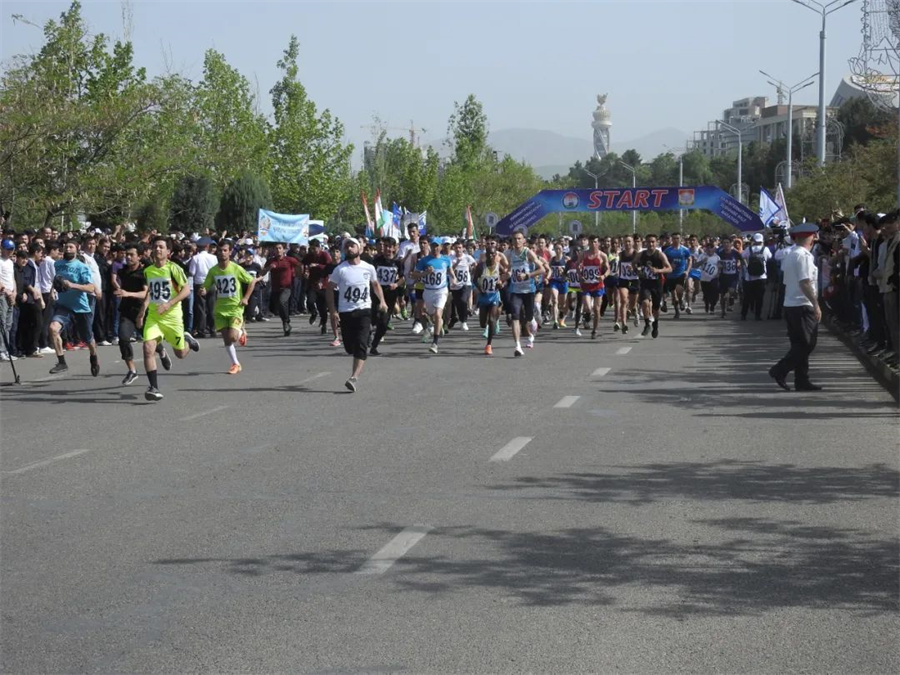 Tajikistan, like other Central Asian countries, participated in the Asian Games for the first time in 1994 and was able to make progress by winning a gold medal at the 2006 Asian Games in Doha. This sports-loving nation is looking forward to a greater harvest in the Hangzhou Asian Games.

"The Tajik people love sports, especially wrestling. On national holidays, such as Navruz, National Unity, State Independence, various sporting competitions are organized, especially Tajik national wrestling, in which teenagers, young people, adults including women can participate." Rahmonzoda pointed out that one of the strengths of their sport is the high morale of the athletes, respect and consistent training.

Currently, about 300,000 people in Tajikistan are involved in professional sports. The national teams play in more than 50 sports, and the Olympic team participates in complex sports games according to the proposed sporting programme. In particular, Tajikistan plans to send more than 200 athletes to the Asian Games in Hangzhou. The sports they excel in are football, judo, wrestling, track and field items, boxing, canoeing, and taekwondo.

"We wish good health to the friendly people of China, and may the pandemic be eliminated as soon as possible through the people's efforts. We wish the Organizing Committee of the Games and other organizers success in organizing the Games. See you in Hangzhou!" Finally, Rahmonzoda expressed his best wishes for the Hangzhou Asian Games. 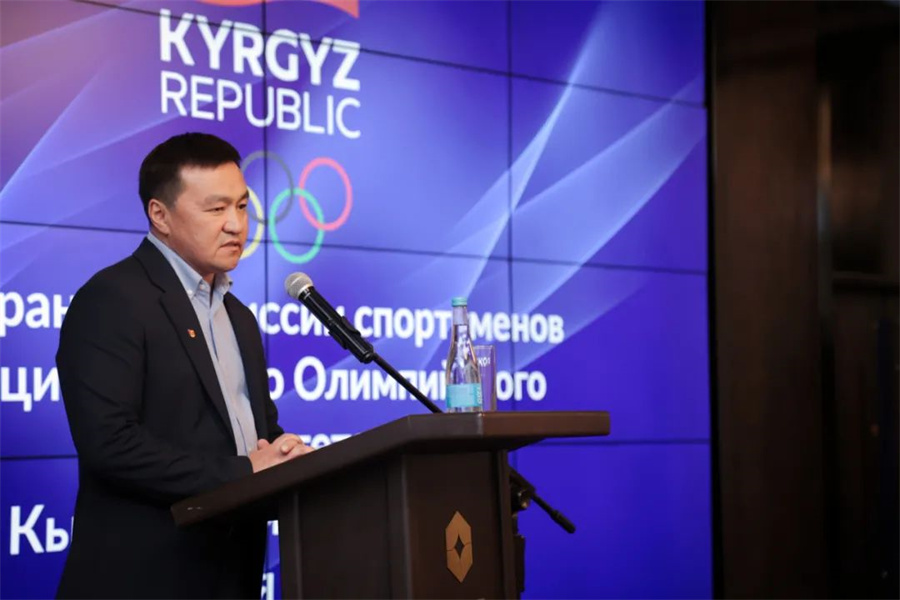 A special interview with Sadyr Mamytov,President of National Olympic Committee of the Kyrgyz Republic

Another Central Asian country, Kyrgyzstan, located at the centre of the Silk Road Economic Belt, has witnessed the development and opportunities brought by the Belt and Road Initiative, as well as the sporting and cultural exchanges. During the interview, Sadyr Mamytov, President of National Olympic Committee of the Kyrgyz Republic, pointed out that one of the brightest examples of the cooperation is the international marathon, which has been held in Issyk-Kul since 2012.

The event was initiated by the Shanghai Cooperation Organization. This made it possible to increase its mass character, to attract a large number of professionals and amateurs from China and other countries.

"We always welcome guests! The SCO marathons are also held in China and Kazakhstan. Our athletes regularly run in these games and become winners." Sadyr Mamytov enthused. 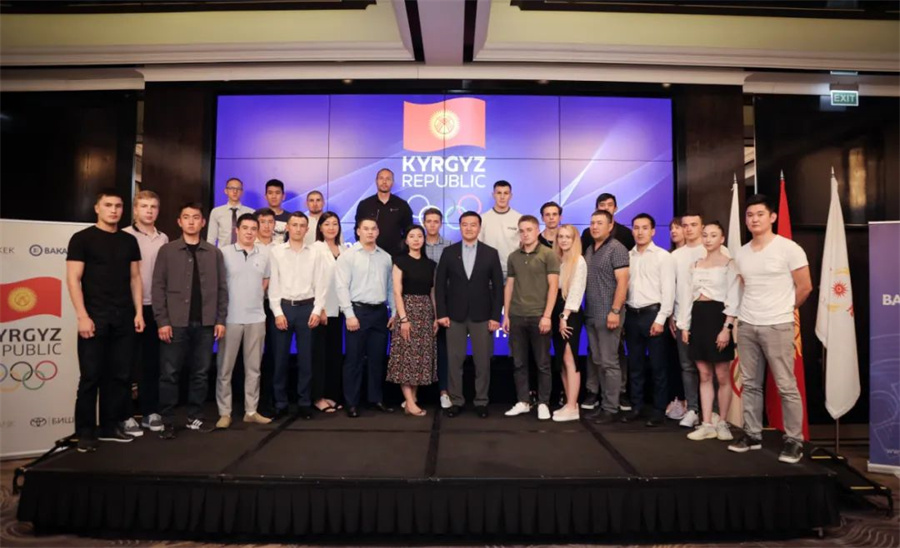 Since the establishment of diplomatic ties 30 years ago, China and Kyrgyzstan have made gratifying progress in sporting exchanges. Sadyr Mamytov said, "China can safely be called one of the world leaders in terms of the number of organized international tournaments. China hosts the Olympic and Asian Games, World and Asian Championships and other prestigious competitions. Kyrgyz people try to actively participate in them."

Meanwhile, the representatives of China, in turn, come to major tournaments in Kyrgyzstan two to three times a year. Our competition with them always takes place in the spirit of a fair fight and mutual respect. Competing, we exchange experiences and enhance friendship.

The Kyrgyzstan sports delegation has great expectations for the upcoming Asian Games in Hangzhou. They have showed up in many large-scale competitions. At the competitions held in Indonesia, the team had its best record in the history of the Asian Games, winning three gold, five silver and twelve bronze medals. At the Tokyo Olympics, the Kyrgyz team also updated its historical achievement by winning two silvers and a bronze. Sadyr Mamytov said, "we can say that our sport is on the rise." As some of the introductions go, the programmes for the Asian Games 2022 will include almost all the sports in which the Kyrgyzstan sports delegation excelled at in the Asian Games 2018: boxing, judo, track and field athletics, wrestling and jiu-jitsu. In most of them, the results of our athletes have only improved over the past four years.

The programme includes several more sports where Kyrgyzstan has good prospects: swimming, rowing and canoe, fencing, modern pentathlon, taekwondo and Wushu. "Currently, our athletes are actively preparing for the Asian Games — they conduct training camps and participate in international tournaments. Everyone wants to perform in Hangzhou at full strength. If they succeed, we can count on a large number of medals."

Although the Asian Games have been postponed, there is a strong bond between China and Kyrgyzstan. Sadyr Mamytov spoke highly of China's rich experience in organizing and hosting the most prestigious international sporting events in recent years. He thinks these competitions have taken an important place in the history of world sports and that can be attributed to their impeccable organization.

Finally, Sadyr Mamytov expressed his best wishes and sympathy for HAGOC. "The National Olympic Committee of Kyrgyzstan has no doubt that the Asian Games in Hangzhou will be organized at the highest level. We understand well why the Asian Games were postponed. Undoubtedly, the health of the participants should be a priority."