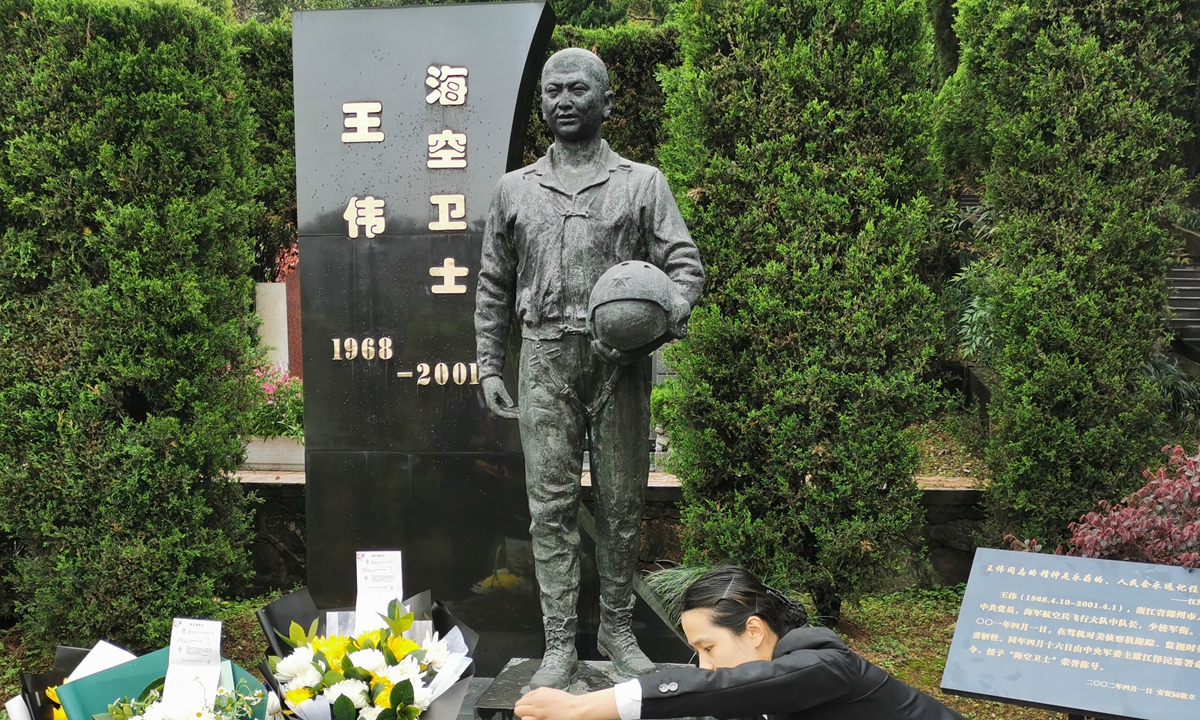 A staffer tidies the cenotaph of Wang Wei, a heroic PLA pilot who went missing and assumed dead after his plane collided with a US spy aircraft 20 years ago. Photo: Xinhua

A staffer on Thursday tidies the cenotaph of Wang Wei, a heroic PLA pilot who went missing and assumed dead after his plane collided with a US spy aircraft 20 years ago. People sent flowers and notes to the hero during a commemoration in Hangzhou, East China’s Zhejiang Province. Photo: Xinhua

A staffer tidies the cenotaph of Wang Wei, a heroic PLA pilot who went missing and assumed dead after his plane collided with a US spy aircraft 20 years ago. Photo: Xinhua

"The world is yours, as well as ours. But in the last analysis, it is yours. You young people, full of vigor and vitality, are in the bloom of life, like the sun at eight or nine in the morning. Our hope is placed on you. The world belongs to you. China's future belongs to you," Chairman Mao Zedong once said.

This is why the West feels scared. China's youth deserve the attention of the West simply because they inherited the fearless and patriotic spirit of the heroes who were dedicated members of the Communist Party of China (CPC) and helped shape today's prosperous and strong China. Inspired by that spirit, they are going to make the country more prosperous and stronger.

In late June, Global Times reporters went to the tombs of three modern martyrs who died for the country to discover how their legacy is remembered and what is the impact in today's youth.

"I want to be as brave as they are"

The city of Shenyang, where one of the Chinese People's Volunteers (CPV) martyrs' cemeteries is located, was soaked with week-long rain. However, that did not stop people's solemn march to pay tribute to the 123 war heroes who rest in peace under pine trees, and to the 197,653 soldiers who sacrificed their lives in the War to Resist US Aggression and Aid Korea (1950-53).

One of the names on the black marble wall is Mao Anying, Mao Zedong's son. The 28-year-old man crossed the Yalu River on October 23, 1950 with his fellow soldiers and never returned.

China's participation in the war provided a sound foundation for its development as a newly established country at a time when it was rather backward and in dire need of a full-scale reconstruction.

For China, fighting against troops from the US, the strongest power in the world, and pushing them back to the 38th Parallel, was a great victory. This success ensured a peaceful development environment for China and secured the international prestige of the Chinese military through the war. The spirit of all young men and women who sacrificed for the country during the war was inherited.

Zhang Juncheng, a grade-2 student at a primary school in Shenyang, visited the cemetery with his mother. Zhang was too young to understand what the war meant for China at that time but he recognized names of some war heroes he had learned at school.

"I just wanted to know about the heroes. I want to be as brave as they are," Zhang told the Global Times.

Su Mengqi, a junior student at the LuXun Academy of Fine Arts, told the Global Times that "Mao Anying was as normal as any son of a father, husband of a wife. But he was also outstanding for his courage, like many who died at such a young age to protect their people."

"Their faith in an independent, dynamic and strong China continued to inspire young generations and bloomed in a strong country, steadily rejuvenating," Su said.

On June 27, Su took the oath to join the CPC in front of the memorial monument for the CPV martyrs, together with other young Party members from her college.

"We will never give in to the enemy"

The audio clip circulating online was alleged to be the last words left by Wang Wei, an air force pilot and a CPC member who died at the age of 33 when his J-8II fighter jet collided with an American EP-3 signals intelligence aircraft above China's exclusive economic zone, southeast of Hainan Island, in April 2001. However, we will never have a chance to verify it.

At the Anxianyuan Cemetery in Hangzhou, East China's Zhejiang Province, where Wang's memorial is located, replicas of China's military equipment, including an advanced J-20 stealth fighter jet and aircraft carrier Shandong (Hull 17), were neatly placed in front of his statue.

Tensions in the South China Sea are still high, with US reconnaissance aircrafts edging near China's coastal regions and sending shockwaves. But today's China, after two decades of economic and military development, no longer has to endure provocations from the US or the West.

Besides fighter jet models and flowers, many people sent Wang photos of Yang Jiechi, member of the Political Bureau of the CPC Central Committee, saying to the Americans during the China-US talks in Alaska in March that "the US is not qualified to speak to China from a position of strength."

This year marks the 20th anniversary of the passing of Wang and the number of people who came to pay him respect from late March to mid-April, a traditional season for Chinese to sweep tombs and mourn the dead, was many times more than in previous years, Shan Lu, a cemetery staff, old the Global Times.

"Soldiers, students, ordinary citizens... Everyone came to mourn martyr Wang," Shan said, adding that "this shows that heroes are always alive in our hearts."

Some months ago, a photo of a man in his 20s in a navy uniform saluting Wang's statue at the cemetery went viral on Chinese social media.

The photo was taken by Shan's colleague. After the young man left, he found a letter left in front of Wang's memorial. The letter, signed "Your comrade-in-arms coming from 20 years later," said that it was the fighter jet collision incident and Wang's sacrifice in 2001 that inspired him to join the army.

"The Chinese nation has never lacked a backbone," he wrote. "Twenty years ago, you were one of our nation's backbones. Now it is time for us to take up the baton from you. We will never retreat, never surrender and never give in to the enemy, no matter how shameless, how cunning and how cruel they are."

"Every soldier is a boundary monument" 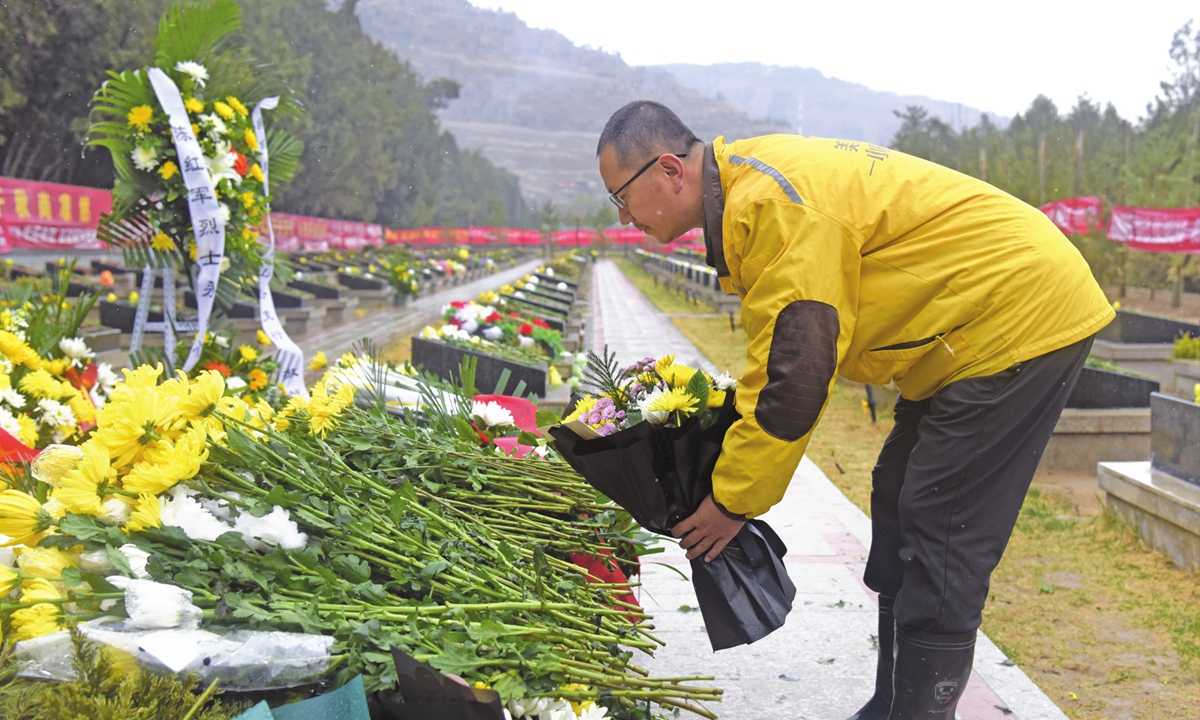 The tomb of Chen Hongjun looked peaceful in the early summer days.

Chen was one of the four frontier PLA soldiers who lost their lives when defending national sovereignty and territorial integrity in the border clash with India, in the Galwan Valley in June 2020. He was only 33 when he died.

Chen was buried in the Martyrs' Cemetery in Lanzhou, Northwest China's Gansu Province, where he spent four years at the Northwest Normal University before joining the army.

When China unveiled the casualties and details of the Galwan Valley confrontation for the first time in February this year, people from Lanzhou and other areas came to pay tribute to Chen, according to Zhang Yan, a cemetery staff.

Among all the offerings people brought to Chen's tomb, one of the objects with a special meaning was a cotton tree from Xinjiang. Zhang told the Global Times that it was sent amid the Xinjiang cotton row when the US and other Western governments ramped up pressure on China over alleged human rights abuses in Xinjiang.

Zhang noted he has observed a rise in the past two years of a national sentiment to mourn, remember and respect martyrs. Many parents brought their kids to Chen's tomb to educate them on his heroic feat.

"Most of us live in peaceful times and have no experience of the hardships and dangers at the border. Children have to be taught about the spirit of fighting against enemies at an early age," Zhang said.

Hou Ziteng is in his final year of college at the Northwest Normal University. Upon entering university, he chose to serve in the army for two years. He was assigned to the same battalion as Chen's.

"When I patrolled at the border, we occasionally had conflicts with the Indian side but far less serious than the Galwan Valley clash Chen experienced. I often wonder if I was still there, would I fight as bravely as he did?" said Hou.

He then gave a definite answer.

"All of my fellow soldiers, most of whom in their 20s, would fight in the front regardless of consequences. The belief of safeguarding every inch of our land, a sense of honor and a hot blood, all encouraged us. Every soldier is a boundary monument," said Hou.

The thoughts and feelings may be distant to some young people, who are exhausted by a culture of hard work with seemingly little reward and thus embrace the lifestyle of "lying flat." They don't want to work overtime, are satisfied with the life they have and would just let time pass.

Hou said what makes him different from his classmates who never served in the army, is his executive and planning ability, and a calm mind, which he learned through his military service.

Liu Haijian, Chen's head teacher in his final two years of university, believes Chen's heroic deeds are a result of his responsibility as a member of the forces led by the CPC as well as his own ideal of serving his country.

"I tell my students to take Hongjun as a model. I'm not telling them to sacrifice their lives as he did, but to become a person who can commit and contribute to the country. When they combine their personal dreams with the goal of the country's development, they will work with a down-to-earth manner," Liu told the Global Times.

"It is my responsibility to let the spirit of heroes pass to the next generation. A great nation will never forget heroes," said Liu.