While many young Chinese designers are learning modern arts from Western countries, a German designer finds the local arts in a small village in Hangzhou quite inspiring.

The carpenter wants to be more creative

Born in a German village and grew up there, Christoph John attended a vocational school for carpentry and became a carpenter after graduation.

After three years of making furniture according to the given blueprints, he found it leaving little room for creation. "I want to create something cool besides earning my bread by making what is required by my customers."

Then he went to the University of Applied Arts in Schneeberg, which is not far away from his home to study product-furniture design. During his five-year study, he also found himself interested in industrial design. After one year of study in Finland, the man went to Domus Academy in Milan, Italy to do car design, and it was where he met the Chinese designer Zhang Lei.

"We found that we share the same philosophy in designing, and similar growing paths," said Chris. Then Zhang Lei invited Chris and his wife to China.

In 2010, Chris joined PINWU, a multi-practice design studio focusing on the materials used in China's traditional crafts. The studio collaborates with some local and international Chinese brands to transform the traditional crafts into the contemporary design. In the same year, Chris and his wife moved to Hangzhou. 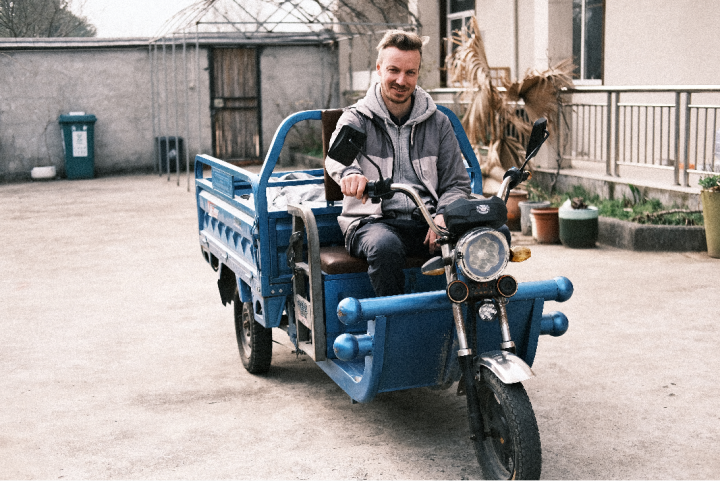 Chris was riding an e-tricycle, which is a typical mode of transportation in the countryside.

They made an opposite move

During the first few years in Hangzhou, Chris lived in Wuchang subdistrict in Yuhang District where they usually took bike trips on the weekends. Once, while cycling in Qingshan Village in Huanghu town, they met two young people who ran a school teaching things about nature in the village. "They showed us around, and we immediately fell in love with this place," said Chris. 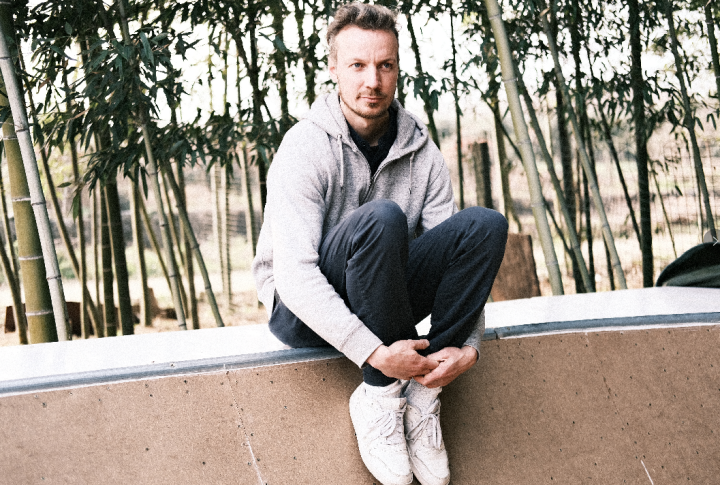 Later, they found a half-damaged and abandoned building that was used to be the village assembly hall. In 2017, they redecorated the building, and moved the Rong Design Library, China's first library of traditional materials that founded in 2015, to the assembly hall, which also serves as the office for the designers in the studio and a study for the children in the village.

Members of PINWU have collected hundreds kinds of materials commonly used across the country. After the establishment, the library hosts an annual exhibition of the themed designs, which is open to the designers worldwide, welcoming them to research into the traditional materials for modern inspirations and creations.

In 2019, Chris and his family moved to the village. "Nice but challenging. Most people moved away from the village to cities, but we did a kind of opposite move," says Chris. Living in a village around 45 minute drive to downtown Hangzhou, Chris says it is "not too far" and can "enjoy both the urban and suburban lives."

"With fewer restaurants and smaller communities, it might be boring for some young people. But for us, it's close to nature," he added. "In some ways, it's like a coming back of my childhood."

They once resided in an apartment in a tall building, but they found it too small for them. Now living in the suburb, Chris and his family have their own garden and even a tree house in their backyard.

"We enjoy the freedom of doing whatever we want," Chris said. His 6-year-old daughter is the only foreign kid in her kindergarten class in Huanghu Town.

As a designer, Chris draws inspiration from the countryside.

A paper chair near the gate of Rong Design Library inspired by the traditional oil paper umbrella demonstrates his ideas. Named "Piao," the chair won the 2012 Red Dot Award Best of the Best.

The basic process of making the oil-paper umbrella is to glue layers of oil paper onto the bamboo frame. Chris likes gluing the paper on himself. Layer by layer, the paper cover is glued up to its desired strength.

"After watching how the locals make umbrellas, we thought maybe we can use that material for a totally different craft." says Chris.

At the moment Chris was working on a bamboo weaving chair, trying to combine the interwoven bamboo string by stitching them together with a fiber.

Together with his wife Nicole Goymann, Chris tried the traditional ways of reeling silk. They bought some silkworm cocoons and reeled silk on their own by boiling the cocoons and reeling off silk with a spinning machine.

Chris and his fellow designers always try to do their research by breaking apart the traditional Chinese crafts seeking for the materials they use and applying them to creating something new. It provides a great foundation and inspiration to creating new furniture, installations and interiors for various brands.

Since 2013, they made a series of shopping window installations for a luxury brand. In 2017, a concept named "Playful SunMao work," was realized. The shape of which was inspired by the mortise and tenon wood joint, a traditional Chinese craft that provides countless possibilities of inserting one piece of wood into another, whatever shape it is—bars, boards, sticks, cubes, and etc. For hundreds of years, it is used to construct buildings, assemble furniture, add decorative elements, or make building blocks.

When I met him on March 14, he was busy making a new series of decorations for that brand.

"It's trendier for young designers to learn these cultural heritages from the craftsmen who have done a job for decades to make amazing crafts. By revitalizing their skills, there will be something new," says Chris.