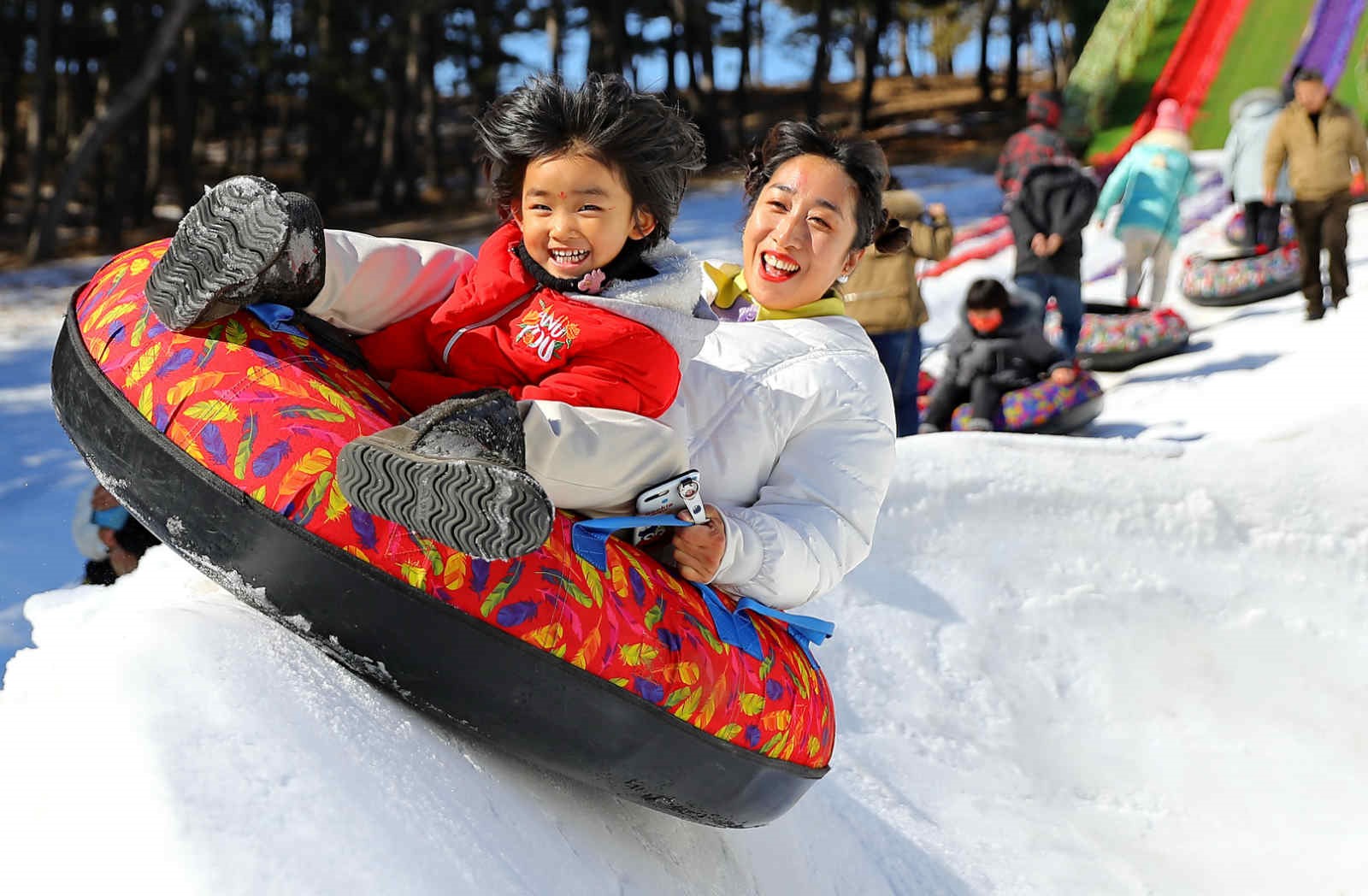 Ski resorts and ice rinks remained hot destinations for Chinese to go during the past Spring Festival holiday. As the Beijing 2022 Winter Olympic Games approach, winter sports are enjoying increasingly higher popularity across the country and going into the daily life of the public.

Yuan Zhaozhi from Beijing took his son who's in primary school to a ski resort in a suburb of the capital during the Spring Festival holiday.

"Many of his friends love skiing, so he asked me to take him to a ski resort soon after the last semester ended. Surprisingly he was even better than me after we both learned the basics in the morning," said the man, who was a completely tyro skier then, adding that the development of the sport shall start with children.

As a part of the host city, his family shall actively join winter sports, especially when the Beijing 2022 Winter Olympic Games are about to kick off in less than a year, he told People's Daily.

Driven by the Winter Olympic Games, the visitor volume experienced steady growth this winter in major ski resorts located in suburban Beijing and Chongli, a district of Zhangjiakou of Hebei Province that will host six disciplines during the 2022 Winter Olympics.

Though ski resorts adopted measures to limit visitor crowding for pandemic control, especially during the winter vacation and the Spring Festival holiday, the enthusiasm of skiing fans never faded.

Before the Spring Festival holiday, the Chinese capital issued e-vouchers to citizens to boost cultural consumption, including free tickets to ski resorts. According to statistics, two ski resorts in Beijing's Yanqing District received a total of nearly 15,000 skiers during the 7-day holiday, as well as 155,000 tourists, generating total tourism revenue of over 10 million yuan ($1.55 million).

To bring 300 million Chinese into the fold of winter sports with the 2022 Winter Olympics is a solemn promise made by China to the international society. At present, winter sports are no longer exclusive to north China, but have been developed across the country.

In February this year, southwest China's Sichuan Province kicked off its third winter sports festival. A total of more than three million people joined the indoor and outdoor winter activities held during the Spring Festival holiday, which significantly expanded the influence of winter sports in the province.

In Shanghai' Lingang New Area, the construction of Wintastar Shanghai, the world's largest indoor ski resort started on Feb 14. Expected to be completed before the end of 2022, the 90,000-square meter project will attract winter sports fans around the world. After years of development, Shanghai is now seeing more than 600,000 people skiing each year.

The holding of the Beijing 2022 Winter Olympic Games not only accelerated the construction of winter sports venues in China, but also activated tourism potential related to winter resources. Local governments across the country have all tailored new measures and developed new products, so as to bring winter sports closer to the people.

Jilin city of northeast China's Jilin Province is situated on the golden latitudes of winter sports. It has two world-level ski resorts and multiple medium and large ski areas. During this Spring Festival holiday, the city issued coupons to attract citizens and tourists to join winter sports and release market potential. Statistics indicated that Jilin received over 2.6 million tourists during the holiday, witnessing tourism revenue of 2.1 billion yuan.

Driven by the craze for winter sports, many regions in south China are also building relevant commercial complexes and mountain skiing facilities to promote the development of the industry. So far, southern cities of Guangzhou, Kunming, Chengdu and Chongqing have all become hot destinations of winter sports, and provinces of Zhejiang, Guizhou and Hubei saw an annual growth of around 10 percent in the number of winter sports tourists.

A report issued by China Tourism Academy said that "to play with ice and snow" has become a new fashion of China's winter tourism, a sector that is injecting new impetus into winter consumption. A total of 230 million Chinese are expected to join winter leisure activities and tourism this winter, generating revenue of more than 390 billion yuan.