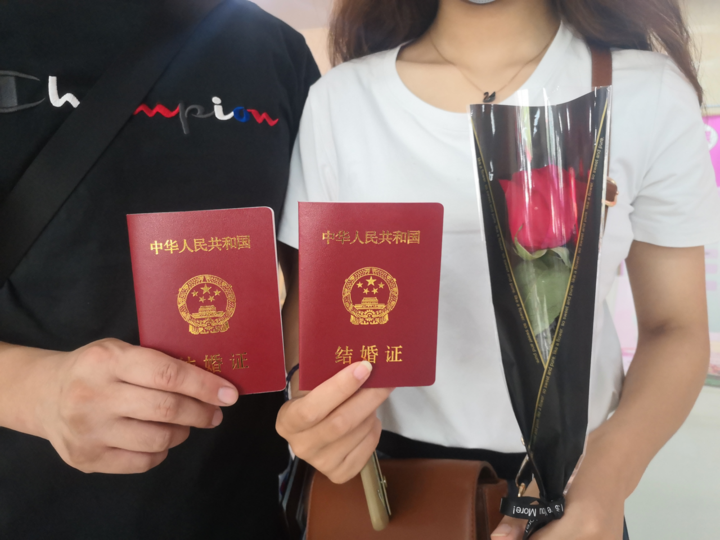 A couple in Hangzhou, capital of East China's Zhejiang province, poses for a photo while holding their marriage certificates. [Photo/zj.zjol.com.cn]

Hangzhou, capital of East China's Zhejiang province, registered 142 marriages involving residents from outside the Chinese mainland in 2020, a drop in its total of 285 in 2019, according to statistics released by the Hangzhou civil affairs bureau on Jan 18.

Officials explained that the decrease was due to the difficulties caused by the COVID-19 pandemic.

Most of the registered newly married couples were aged between 20 to 29, said officials from the Hangzhou civil affairs bureau.

Last year, Hangzhou recorded 57,692 marriages in total, a year-on-year increase of 2.42 percent. A total of 22,699 couples in Hangzhou divorced, decreasing by 2.04 percent from last year.

Analysts said that it may be attributed to the Civil Code, which was officially put into effect on Jan 1. The code proposed the "cooling-off period" rule for couples intending to get divorced.

According to the rule, couples deciding to get divorced should have 30 days to "calm down" and confirm whether they want to continue with their actions after they submit the petition for a divorce.

The new rule will pose a restraint for people wanting to get divorced, said an official at the Hangzhou civil affairs bureau.

Hangzhou now offers legal and psychological counseling services at every marriage registration window in the city.