The 19th Asian Games Hangzhou 2022 will be held from Sept 10 to 25,2022 in Hangzhou, capital of East China's Zhejiang province. China Daily is teaming up with the organizing committee of the Games to spotlight the preparation for and facts about the Hangzhou Asian Games.

The Hangzhou Asian Games Organising Committee has been carrying out a publicity program in local schools, communities, organizations and societies since the end of May in a bid to arouse public enthusiasm for participating in and preparing for the Games.

At the opening ceremony of the sports meeting, students from the seventh and eighth grades formed 28 athletic groups, mirroring the 28 Asian Games-related countries and cities.

They performed in front of an audience a brief show that detailed and depicted key elements of the Games and the host city Hangzhou.

It introduced the mascots of the Games－Congcong, Lianlian and Chenchen. The city's landmarks, such as Hangzhou International Conference Center, the Hangzhou Olympic and International Expo Centre and various scenic spots of the West Lake were also promoted.

"Our school holds athletics meetings every year, but it was the first time for us to carry out an Asian Games-related sports meeting," said Wang Weiwei, a teacher at Hangzhou Middle School, adding that the 28 groups displayed the different characters of the Asian Games-related countries and cities.

Shao Jingshuo, a middle school student and a member in one of the 28 athletic groups, said that while she may not be able to help too much in the upcoming Games, she can always use her polite manner to promote the Games' theme of "Ethical".

"Holding sports competitions related to the Hangzhou 2022 is expected to spread knowledge about the Asian Games, and promote the concept of unity and create a positive attitude among students," said Yang Meng, deputy director of the Press and Public Relations Department of the HAGOC, who added that the organizing committee will cooperate with the local education bureau in combining school sports activities with the Games.

In addition, the HAGOC held an Asian Games publicity activity in the Wangjiang community of Hangzhou's Shangcheng district on July 26 to encourage more communities to take part in the Games.

Local residents learned about the Hangzhou 2022 through some Games-themed traditional Chinese cultural experiences at the activity, including paper-cutting, dough sculpture making, palm weaving and tie-dyeing.

Zhang Ruiyan, a student among the residents taking part, said that she would like to serve as a tour guide during the Games, helping tourists from around the world to explore the city's beautiful scenery and discover its delicious food.

Besides cultural activities, the Shangcheng district will mobilize 100,000 volunteers to take part in public campaigns featuring environmental protection and garbage sorting in a bid to hold a "Green" and "Ethical" Asian Games.

"We hope to combine the history and traditional culture of Shangcheng with the elements of the Hangzhou Asian Games to deepen the understanding of both," said Mao Suyun, deputy district head of Shangcheng.

Meanwhile, information about the Asian Games and related activities have been promoted among many local families in Hangzhou.

Xihu district launched a series of family-oriented activities on July 13, such as the Asian Games' aesthetic lectures, basketball games and environmental protection activities, which are expected to help more residents better understand the Asian Games and mobilize them to take part as volunteers.

"I am very happy to participate in these activities and hope that more people will promote the Asian Games while doing exercise," said Zhejiang native He Ning, an Asian Games former gymnastics medal winner.

Enthusiasm was also aroused among government organizations during a basketball game held at the Hangzhou Staff Culture Center on Oct 12, which attracted more than 200 participants.

"Through the basketball game, we can make a lot of new friends to enhance mutual understanding, which is conducive to our daily work and we can also improve our physical health," said Xu Chenhao, a Hangzhou government staff member.

To date, the city's government organizations and social communities including women's federations, working committees and bureaus of education, sports and civil affairs, schools and universities have carried out nearly 70 rounds of the Games' publicity program, impacting more than 2 million residents. These programs have covered the districts of Shangcheng, Jianggan, Xihu, Xiaoshan and Yuhang.

The publicity activities are to be combined with musical and other key events to inspire more people to take part in the Games, according to Chen Weiqiang, deputy secretary-general of the Games' organizing committee and vice-mayor of Hangzhou. 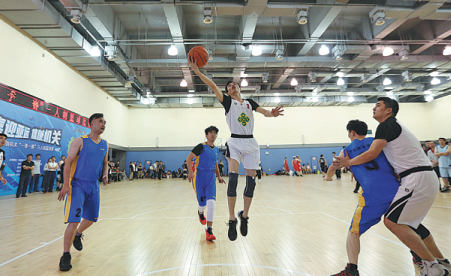 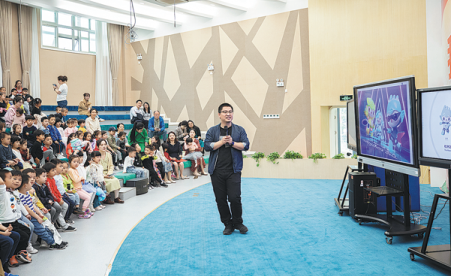 Designer of the mascots for the Games, Zhang Wen introduces the mascots to the children at Zhejiang Normal University Preschool Education Group's international kindergarten in October. CHINA DAILY

More than 1,000 people gather at Hubin Pedestrian Street in Shangcheng district in Hangzhou on Aug 8 to participate in a fitness activity aimed at promoting a healthy lifestyle. CHINA DAILY