Wuliu Alley Historic District is a place full of aroma as twelve coffee shops have been opened in succession in recent years.

Wuliu Alley stretches from Doufusanqiao (斗富三桥) to Daoyuan Alley（道院巷）. During the Southern Song Dynasty, there was a small imperial garden named "Wuliu Garden" in the area. Compared with the great transformation of Qinghe Lane（清河坊）and other blocks, the Wuliu Alley has always retained an ancient vibe. What's more, the trendy coffee culture is gradually adding something new to the old alley. At present, there are established coffee shops like Funky Soul, Bamboo Coffee, and new coffee shops like DOFO and HUG Vintage coffee to offer a variety of options.

As one of the first coffee shops on the block, Funky Soul is known for its dessert Souffle which is made on the spot. After waiting for around 30 minutes, the staff says that the best time to taste the souffle is 20 seconds after it is served. Pairing it with one pot of tea in the warm sunshine would be a good afternoon tea choice.

The Santa Claus outside the walls of DOFO stands out in the alley. Visitors can sit and drink coffee during the day and enjoy alcohol at night, which meets the saying of "coffee in the morning and alcohol at night". Fugui Ping'an is a creative blend of apple puree, cinnamon and latte to present a special feeling of winter. The apple and cinnamon add some thick flavor to the latte and the fragrance of cinnamon a nice finish to the tongue. "Xi Gui" combines honeydew melon, Pu 'er, oat milk and espresso with a rich taste in the first sip.

HUG, as a new internet diva shop, combines Vintage shop with coffee. Order a cup of coffee on the first floor and walk across the vintage shop onto the second floor, and you may spot a very small terrace with a view of sausages being dried on the balconies of the apartment buildings across the street. It really brings fashion to the ancient alley.

OFF LINE is more like a western restaurant than a coffee shop. It is located at the street corner of Doufuerqiao Alley(W）（斗富二桥西弄）, where diners may sit at street-facing tables to enjoy their brunch with friends. Boasting Chinese facade with Western food, it is also a perfect place for shutterbugs.

In addition, there are also other coffee shops with special features in the district. If you don't have time to sit down for a sip, try a special drink at Flame Coffee. Mulled Wine and desserts at Bamboo Coffee are also popular. 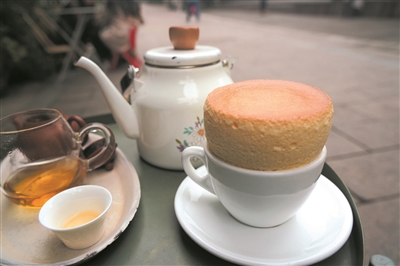