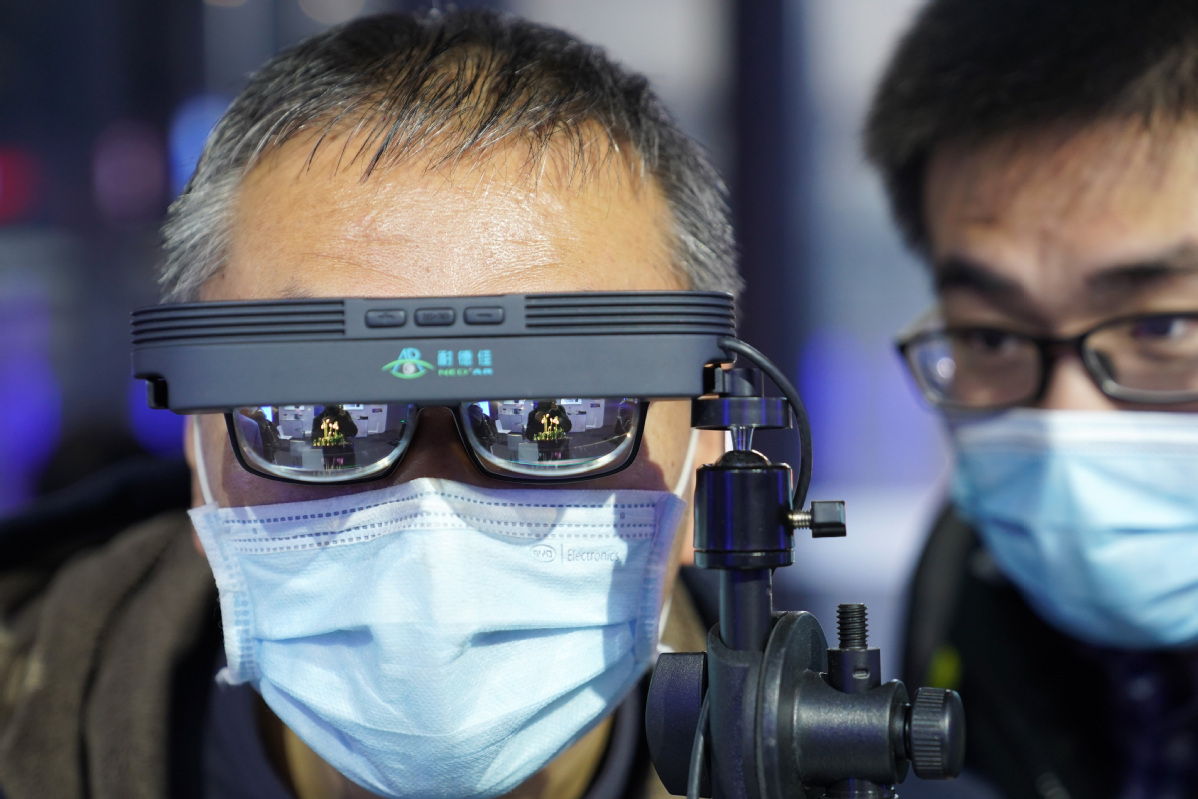 A visitor experiences the new AR glasses at an exhibition in Beijing, on Nov 11, 2020. [Photo/Xinhua]

(China Daily) I'm a tech reporter, and I must confess rapid advancements in the field seen over the past six years, which might have impressed tech consumers, have, however, left me a bit underwhelmed. But two areas that hold extraordinary interest to me for their relatively slow development are virtual reality and augmented reality.

I first got my hands-on VR experience on headsets in 2016 when I was a cub reporter and the field was still nascent. I was totally captivated by the fantastic experience created by HTC Corp's HTC Vive headset. In a VR game, I battled gamely a line of lifelike zombies. The game offered me an immersive, 360-degree digital world. It was so scary I screamed.

Back then, many industry participants told me such technologies would become popular with the mass market in five years or so. Even Mark Zuckerberg, CEO of Facebook, forecast in a forum in Beijing that 2016 would be a really good year for VR to start to ship, and VR would become a really big thing in five to 10 years.

Five years have sped by. We are in the second half of 2021. Contrary to visions, forecasts and predictions, VR and AR are yet to strike a chord at the tech consumer level.

Even early birds who bought VR headsets and later VR goggles don't seem to know the whereabouts of their expensive gadgets (which may be gathering dust at some nook or cranny).

What might have gone wrong? Well, one factor that I can instantly think of is that the VR and AR gear was not comfortable and convenient. Another factor might be the dearth of adequate high-quality AR and VR content. What's the use of costly hardware without software?

Then there is the factor of relatively limited connectivity of 4G.This restricted the design of hardware and the VR experience.

Both AR and VR apps are very sensitive to network performance. Any interruption will have a significant negative impact on user experience. That is because combining and synchronizing the real world and the motions of the user with a digital world requires a massive amount of graphical rendering processes.

Such heavy rendering processes can only be properly handled with the help of 5G whose fast and reliable network connection can ensure a string of devices work in real time and cut the cord connecting many VR headsets to PCs, with the cloud taking over the heavy lifting.

For instance, on-device processes can be augmented by splitting workloads between the AR or VR device and the edge cloud. Graphics rendering on the edge cloud augments latency-sensitive on-device head tracking, controller tracking, hand tracking to motion tracking. This process is called split rendering.

When the rendering is to be done separately in the cloud and on different devices, a fast and reliable 5G connection is needed to deliver a fine final experience to the user. As a result, AR and VR use cases require stringent network requirements such as low latency, high reliability and high bandwidth from 5G network.

5G's enhancements to VR and AR are now already reflected in some pioneering apps in the world, thanks to the global efforts to quicken the rollout of 5G networks. The telecom operator Vodafone in Italy, for instance, provides AR for use in ambulances. In 5G-connected ambulances, paramedics can instantly review a patient's healthcare history and apply required procedures by wearing AR-equipped glasses.

During the journey, paramedics will be able to send vital signs and 360-degree images in real time, thanks to the 5G network's ultralow latency, which reduces lag time to just a few milliseconds.

In China, which has 916,000 5G base stations so far, I can now also personally use many innovative AR applications. For instance, in Beijing Fang, a shopping plaza in Beijing, I can use my smartphone to enjoy AR-enabled, lane-level navigation, play AR games and experience and savor the fusion of the real world with the digital world.

In West Lake, a famous tourist attraction in Hangzhou, Zhejiang province, I can now enjoy an engaging and immersive experience through the "West Lake AR Tour "feature provided on the mobile app West Lake in the Palm. When I place my phone up to a scenic spot, the phone screen will display AR-powered stories to introduce the scenic spot.

That just offers a peek into how 5G will help unleash the new possibilities of VR and AR. In the future, the next generation of immersive experiences may even add new sensations with the help of 5G-we may feel vibrations of a car race or the breeze on a tropical island. And I'd like to bet that, dear reader, will be a future worth waiting for.