In the West of Hangzhou lies the Jingshan tea plantation and few people outside the scope know about it. It is where Lu Yu, the “sage” of tea who rote the Classic of Tea (the first foundational and comprehensive guide to tea), and where the Japanese ceremony was originated.

On April 16, internationals from 5 countries living in Hangzhou got to know Jingshan tea and practiced tea cultural rituals, with Hangzhoufeel. 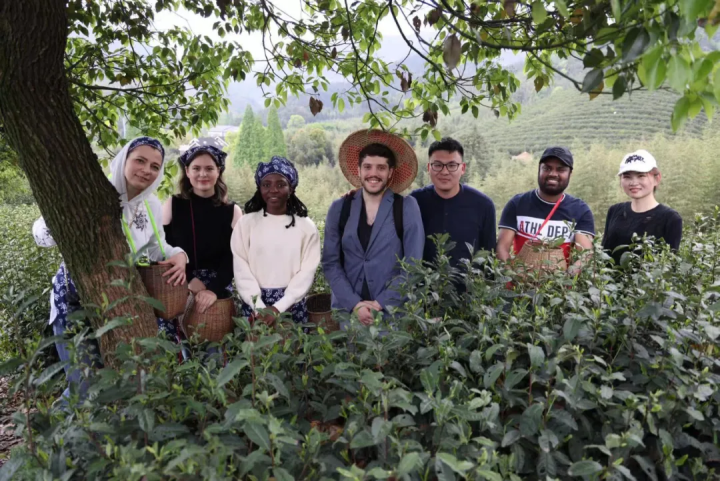 The journey began with tea plucking in Jingshan Village, which is hailed as the number one Zen village in China. “10kg of crude leaves can yield only 2 to 3kg of finished tea,” On hearing this, Nicolas from France looked astonishined at his almost empty bamboo basket. Working hard as they were, what they had been plucking for half an hour was far from enough. 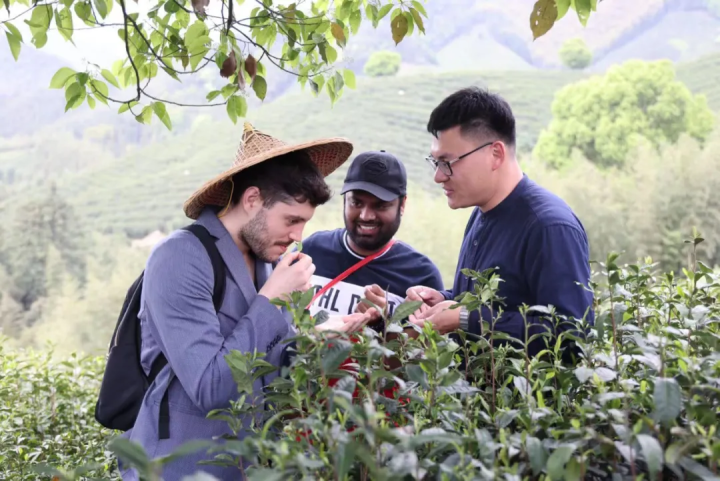 Like Longjing, Jingshan tea leaves were also firstly spread out on the grid. In this process, the humidity of the leaves could be reduced by about 30%.

Lucky for the internationals, Yu Ronghua, the inheritor of the Jingshan teamaking technique, gave them hand-on gudiance on how to dry, roll and steam the tea. 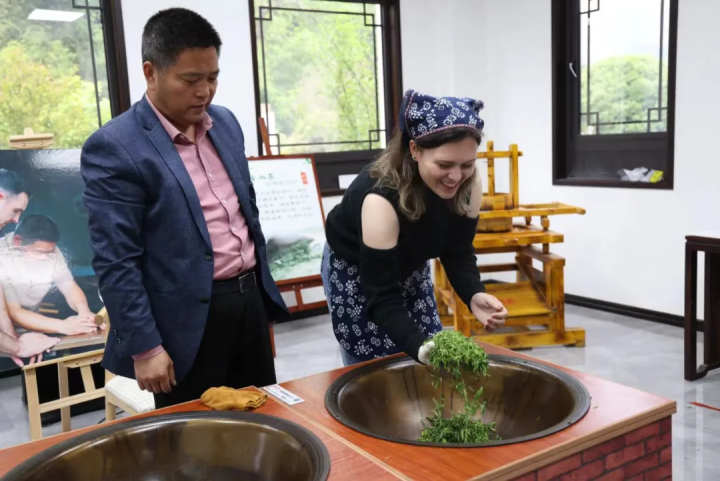 He described the hand-rolling process as “Taiqi rolling” as the leaves were rotated all together in a shape to preserve the maximum taste, smell, and bright green color. 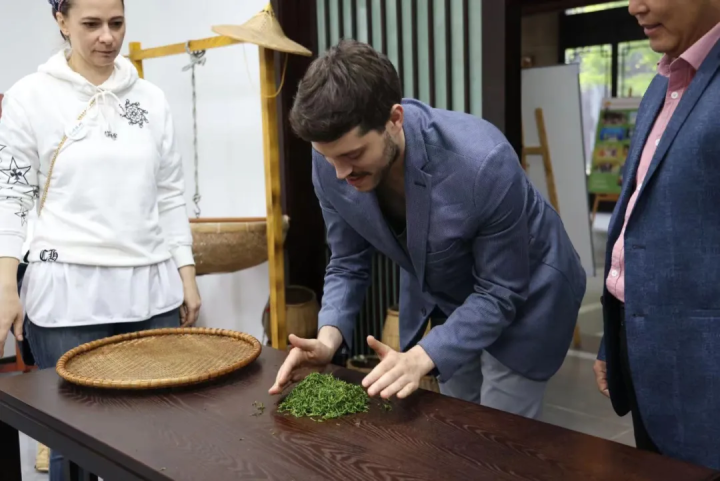 Finally, the tea leaves were moved to a container for steaming to remove the excess water. The process could last for 2 hours.

Congratulations to Nicolas, Ana, Elizabeth, Tania, and Sachi, they had made the “international” Jingshan Tea！

The journey didn’t stop there. Wearing Song Dynasty court robes, the internationals rolled up their sleeves, bowed to other “officials” as they walked slowly together down the path to the traditional Chinese garden, to announce that the empire roleplay had begun. 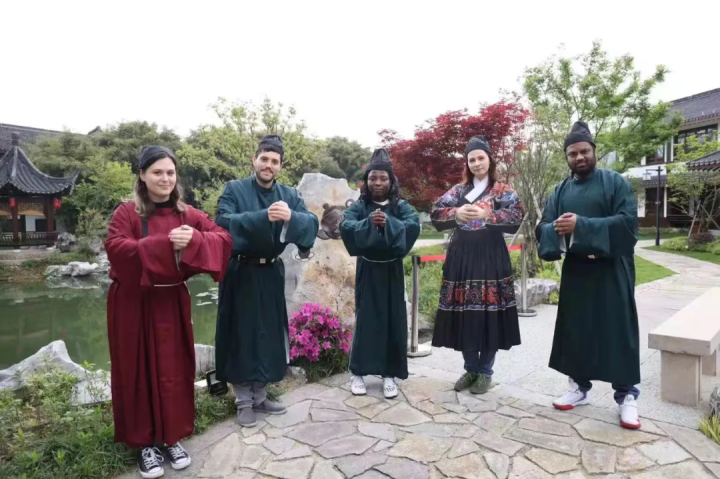 “How was the army doing?” “Empress?” Elizabeth was concerned about the border war with the Jin force. “The rationing of food is sufficient, your majesty,” replied Ana, the “minister”.

The garden is called Lu Yu Spring, the very place Lu wrote his monumental book. Crossing over the high threshold, a Song tea ceremony was taught by a tea master inside the house. 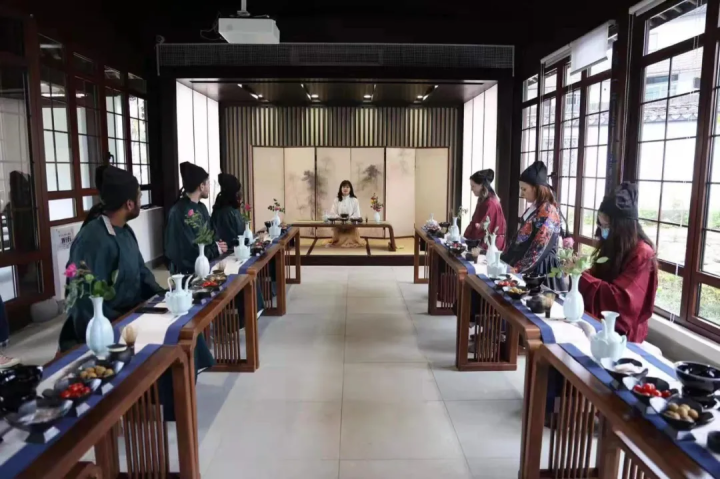 After whipping the mixture of tea power and hot water three times to give it a milky froth, a tea canvas was formed. Then came the creation time! In Song Dynasty, literati would make the most refined painting on tea froth, known as “competing on tea” (斗茶). As someone who “held” the highest power of Song, Elizabeth and her "ministers" undoubtedly drew the best art. Nicolas later named his work “Cha’puccino”. 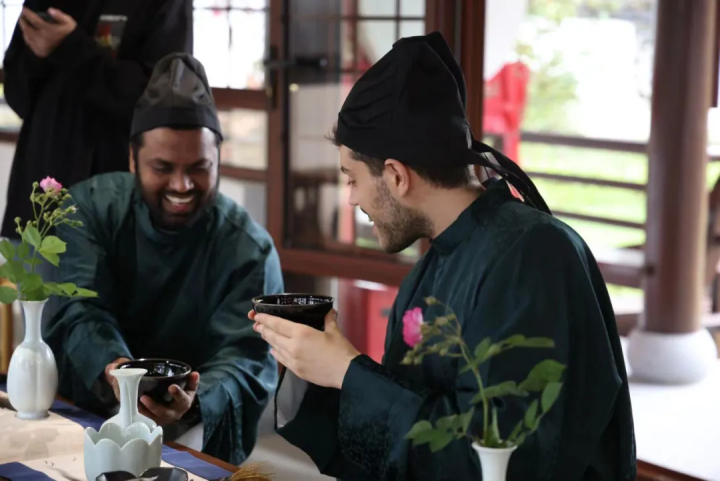 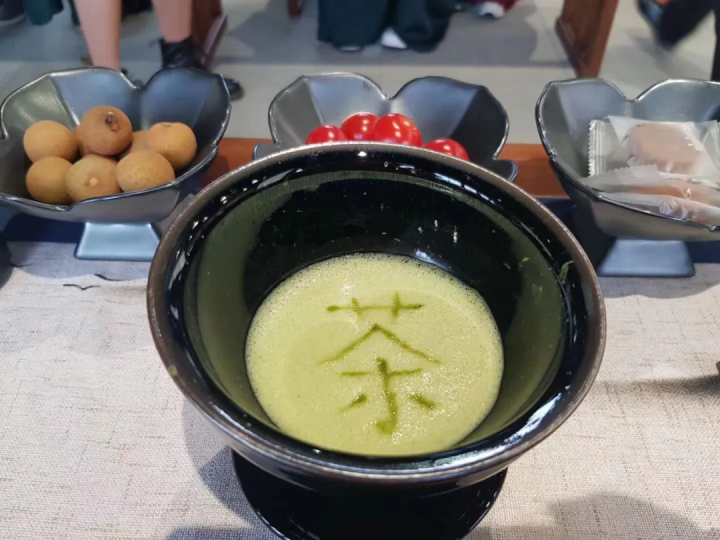 The surprises on that day were full to the brim, exclaimed Ana from Slovenia. “When I thought it’s time to go back, we were taken to a flower sea that looks like a fairyland!”

Ana even kindly posted on her WeChat Moment the transport infomation: there is a direct bus to 径山镇 from the center of Hangzhou (延安新村). If anyone would like to visit, it’s called 六公园至径山寺专线.