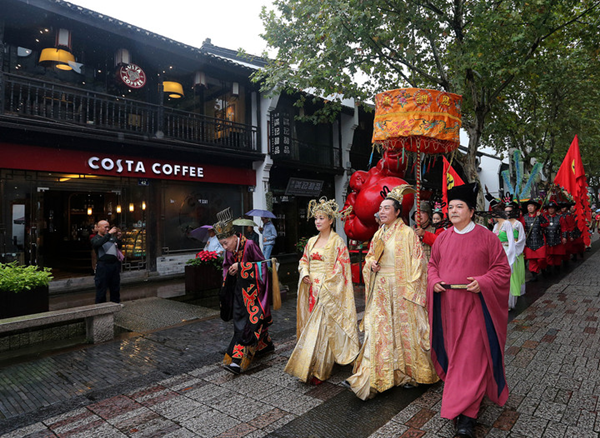 A parade featuring people dressed up as an emperor, a queen, officials, maids, and soldiers from the Southern Song Dynasty passes through a tourist attraction themed around the dynasty’s culture in Hangzhou, Zhejiang province. [Photo/zjol.com.cn]

The Hangzhou Academy of Social Sciences is located in Hangzhou, capital of East China's Zhejiang province and the historic capital of the Southern Song Dynasty.

The institute's books on the dynasty have covered the dynasty's general history, Hangzhou's history as its capital, studies on its politics, economy, imperial examination system, military, beliefs, culture, science and technology, agriculture, handicrafts, and diplomatic relations, as well as important figures such as Zhao Gou, Yue Fei, Lu You, and Zhu Xi.

According to He Zhongli, director of the institute's Southern Song Historic Research Center, these academic books have been awarded 15 honors at the provincial level and above and some have been added to the library resources of world-class universities such as Harvard, UC-Berkeley, Stanford, University of Tokyo, and Kyoto University, making major contributions to worldwide research into the Southern Song Dynasty.

It is our obligation as Hangzhou locals to rediscover the truth of the Southern Song, an official at the institute said. Serving as the dynasty's capital for one and a half centuries has shaped Hangzhou's layout, dining, customs, and more, he adds. He said deep research into the city's history is an integral part of the city's efforts to preserve its cultural heritage and expand its cultural influence.

In order to promote Southern Song culture around the world, the Southern Song Historic Research Center of the Hangzhou Academy of Social Sciences has been holding international academic forums, offering overseas exchange programs for young scholars, and drawing in social capital for historic studies.