Hangzhou is one of the most important opening-up cities in China. In recent years, increasing foreigners come to Hangzhou, Zhejiang Province and call this place their home. While Zhejiang is working hard to promote common prosperity, the city of Hangzhou echoes the call to build itself into a world-class modern metropolis. Hangzhou's ongoing changes in all aspects, from cities to villages and from enterprises to universities, have drawn the attention of expats. For them, they are not only the citizens who live and work in this city, but also the witnesses of the story of common prosperity happening around them.

From November 18 to 19, about 30 expats, including experts, business executives, entrepreneurs, representatives of international students and representatives of foreign business institutions in Zhejiang from more than 10 countries such as Indonesia, Malaysia, Finland, Pakistan, Rwanda, Japan and South Korea were invited to experience Hangzhou's achievement in building beautiful countryside in Huang Gongwang Village, Dongziguan Village, Luci Village, Shishe Village, Eshan She Ethnic Museum and Longfeng Ethnic Village; and to walk into headquarters of ZTO Express in Tonglu County, getting to know its comprehensive logistics service platform under the operational concept of “led by science and technology, supported by data, ensured by talents and operated with intelligence”. 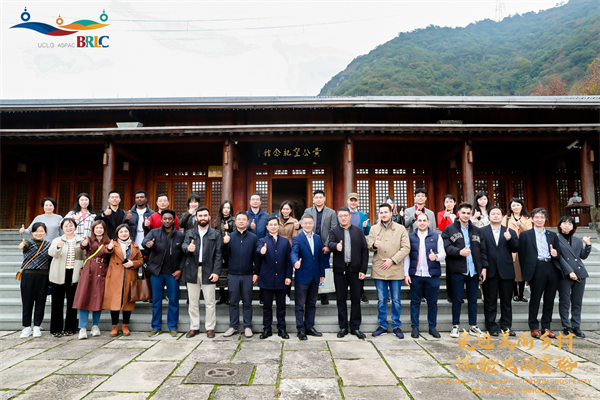 During this two-day trip, our foreign friends recorded what they have seen with pictures and videos, and shared the stories of rural construction in Hangzhou with their families and friends, delivering Chinese culture to more people.

“My great-grandfather was Chinese, so I often heard about Chinese history and culture from my parents. However, I’m the only one who really comes to China in my family.” Olivia Liem is a 20-year-old Indonesian student from Alibaba Business School at Hangzhou Normal University. 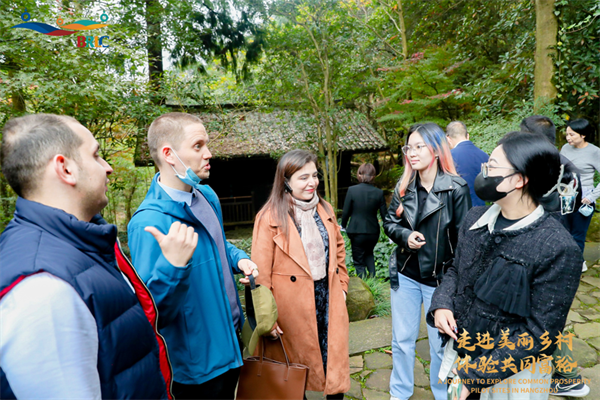 After living and studying in Hangzhou for a month, she said that Hangzhou is a perfect city for education, work and life. “My family loves the beautiful scenery of West Lake in Hangzhou, and they also feel the charm of Chinese culture through my sharing. If there is an opportunity, I hope my family and more foreign friends would come to beautiful Hangzhou.”

At the panel discussion on November 19, expats in Hangzhou and representatives of foreign business institutions in Zhejiang listened to experts' lectures on common prosperity and the 20th National Congress of the Communist Party of China, and shared their feelings towards the lectures and the activities. 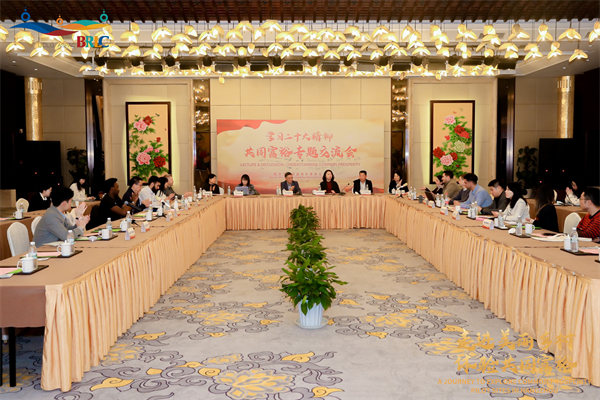 Li Feng, vice president of the Hangzhou Center of AmChamShanghai, said that he and his colleagues have been paying close attention to the convening of the 20th CPC National Congress. 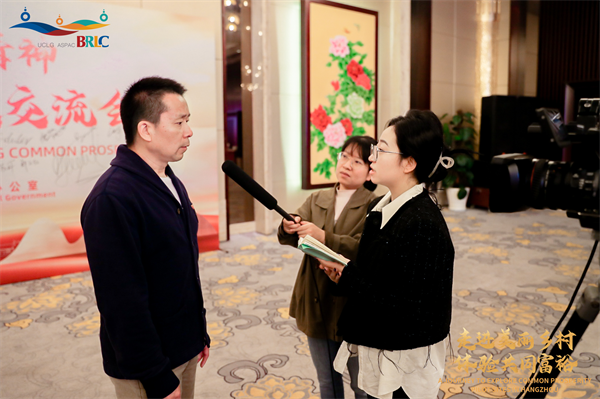 He believed China's historic achievements and reforms in the past decade have not only had a far-reaching impact on China itself, but also injected impetus into countries around the globe to tackle challenges and achieve common development. “The 20th National Congress of the Communist Party of China is decisive to the road that China is about to take, and it will also lay a profound impact on the world at large. China's rapid development has become a major advancement in the course of human civilization, and the successful experience of Chinese modernization will open up a new road to a better future for more countries and people.”

Ayesha Mumtaz is an associate professor at the School of Public Administration of Hangzhou Normal University. “I am especially grateful to the Hangzhou government for organizing this activity, which makes me feel that the good life of Chinese people not only exists in the bustling city center, but also in the vigorous countryside. I am deeply impressed by the clean streets, regular farmlands and busy cafés there.” Ayesha said despite a 7-year working and living experience in Hangzhou, it was her first time going deep into Hangzhou's new countryside to feel the development of rural areas and witness the achievement of these beautiful villages.

Meanwhile, in view of the elderly social groups she is studying at present, she proposed to pay more attention to the life of the elderly, in the hope of seeing Hangzhou put in place a national demonstration model on the care for the elderly in the future. 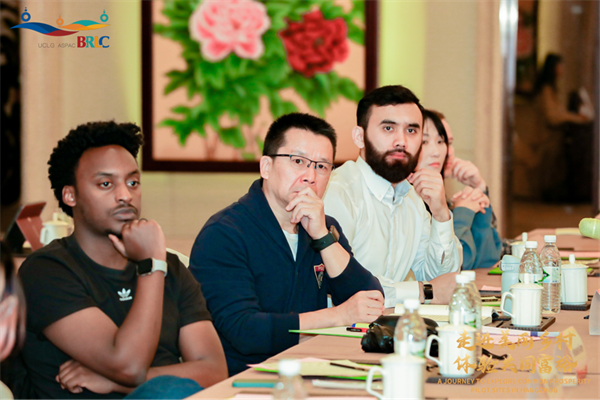 Other expats also expressed their pleasure to walk into the beautiful countryside in Hangzhou, saying that they can feel Hangzhou's arduous efforts to meet the intellectual and cultural needs of people in rural areas as well as the vitality these places exhibit. 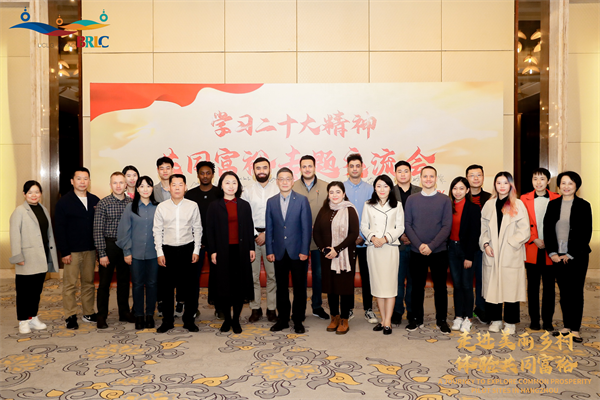 At the end of the panel discussion, Du Shigen, deputy director of Foreign Affairs Office of Hangzhou Municipal Government and deputy secretary-general of the Belt and Road Local Cooperation Committee, concluded that he hoped this kind of visiting activity, expert lecture and panel discussion would serve as a bridge for expats to witness Hangzhou’s development, so as to attract more foreigners to come to Hangzhou, even stay in this city. 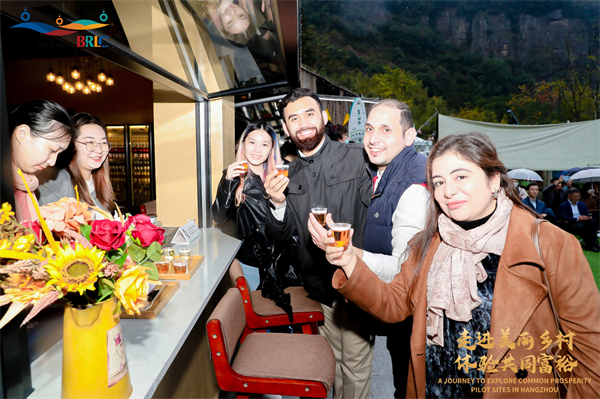 Common prosperity is an important feature of Chinese modernization. Hangzhou needs to take the lead in exploring the path of common prosperity and modernization with universal significance, and inject surging vitality and drive into promoting the practice of “priorities in common prosperity and modernization throughout the province” via reforms, such as building basic units in this regard, in a bid to meet the people’s aspirations for a better life. We hope that expats study, live and start businesses in Hangzhou, together with Hangzhou citizens, would participate in the rural revitalization and the balanced development between urban and rural areas, seeing through our own eyes the achievement that Hangzhou obtains.

Back
Hangzhou's ongoing changes in all aspects in pursuit of common prosperity, from cities to villages and from enterprises to universities, have drawn the attention of expats.