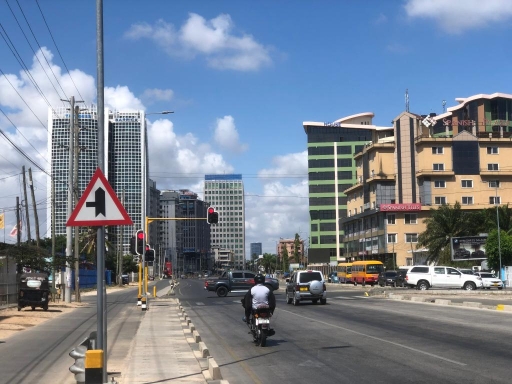 Jumanne Mtambalike, CEO of Sahara Ventures which seeks to build a stable innovation, technology and entrepreneurship ecosystem, says he wishes to see his country Tanzania become a tech hub with the building of Silicon Dar es Salaam.

DAR ES SALAAM, Nov. 20 (Xinhua) -- Tanzania's young software engineer Jumanne Mtambalike minces no words when he says he spends sleepless nights thinking of how long will it take to make his country a technological hub.

One of Mtambalike's in-tray to-do-list is the making of the first-ever technological district along the New Bagamoyo Road in the country's commercial hub of Dar es Salaam.

"Sahara Ventures and partners decided to push this agenda of making Silicon Dar es Salaam and are now planning to engage with the government through the Kinondoni municipal council authorities to see if we can be able to promote this technological district," the software engineer told Xinhua in his 4th-floor office located in a 15-storey building along the New Bagamoyo Road.

He said the technological infrastructure along the New Bagamoyo Road makes it the right candidate for becoming Tanzania's technological district.

Mtambalike said the government has already put in place investments along the road that are suitable for making it a fully-fledged technological district, including the headquarters of the Tanzania Commission for Science and Technology (COSTECH), the Universal Communications Service Access Fund (UCSAF), the Tanzania Telecommunications Corporation and the University of Dar es Salaam's College of Information and Communication Technologies (CoICT).

These state-run technological institutions along the New Bagamoyo Road have lately been joined by the country's leading mobile phone companies, he said, adding: "We are also seeing innovations hubs and data hubs relocating along the road."

"But we are also seeing banks, innovative and startup companies relocating along the same area, naturally making this place a technology district of Tanzania," said Mtambalike, the father of one child.

Mtambalike said a technology district has many benefits, including creating employment opportunities for young people and at the same time pushing the country toward a digital economy.

"A technology district is also a platform where some innovations can emerge to solve some of the challenges facing our country today, in health, in education and in agriculture," he said.

Mtambalike said in May 2016 he visited China for two weeks under the Migratory Bird Program, a non-profit event hosted in Yunqi Cloud Town, Hangzhou, China, that aims to bring the world's youth together for science and technology.

"My visit to China was an eye-opener. I learned how the country is doing in promoting technological districts," said the software engineer who graduated from Bangalore University in India in 2011.

He said he was invited to the 2050 Vision program where he attended an event on Cloud City in China where he was able to visit some of the smart cities in China, adding that he also visited some of the software and app development companies as well as gadget production companies.

"The visit to China was very inspiring to me because I saw the vision of Silicon Dar es Salaam in practical," said Mtambalike.

He said he learned that a fully-fledged technological district can have assembling plants for phones, assembling plants for computers and one can be able to manufacture low-cost designs, adding that "I see that this is possible through strategic partnership and collaboration in Tanzania."

Mtambalike said China is leading in the world when one looks at the number of new innovations and new technologies.

"Right now Sahara Ventures has initiated a campaign called startups schools where we encourage university students to start their own startups," he said, adding that the program is being implemented at the CoICT, the Nelson Mandela African Institution of Science and Technology in the northern city of Arusha and the University of Iringa.

"Our goal is to create as many startup founder companies as possible to address the issue of unemployment in the country because we believe that if we can create job creators instead of job seekers then we can have massive impact in the country," said Mtambalike.

"Sahara Ventures believes the best way to solve the problem is to build a sustainable business around it," said Mtambalike.