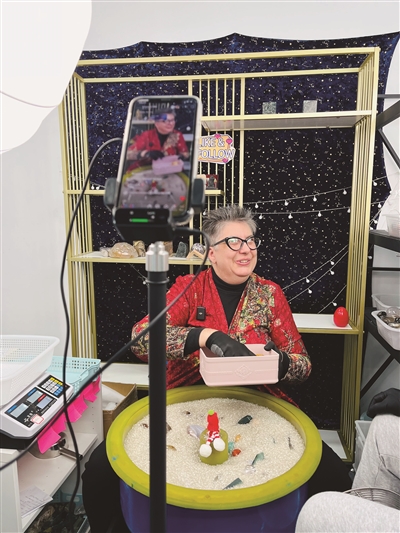 Amy was doing the livestream. [Photo by Liu Yimei]

Every early morning, the Trend Base at Building 5 of the Cai Tong Mansions in the Shangcheng district of Hangzhou, sees various E-Commerce Livestreaming companied with loud yells once in a while.

Not a few internet celebrities get up in the dawn and show up early there. Wearing false eyelashes and flaming lipsticks, they would shout and overact for hours to promote the sales of clothes, shoes, or other products.

Amy Pierce from the US, however, never yells, instead, she smiles. Amy used to be a teacher and joined the Trend Base several months ago. She arrives at her office at around 8am from Tuesday to Saturday, doing preparations for an hour before her live broadcast from 9am to 12pm. Amy seldom wears any make-up, but she likes bright colored or funny clothes.

Yes, Amy made a big career change from over 30 years of teaching (6 years in Hangzhou) to a post of livestreaming in her fifties. "It is time to make a change. Livestreaming is new and there are ways to join on the ground floor, and I was ready," Amy stated with a soft yet firm tone.

Amy took the job after she saw an advertisement in a WeChat group about livestreaming. Unexpectedly, she has turned out to be the best salesperson of the Base's crystal section.

I was curious in the livestreaming room while watching her work last week. She introduced the crystals in her hands first, put them in a swirling plastic basin, then had one scoop of crystals out of it to show to a US customer, who had paid 50 dollars already. Amy was smiling mildly through the whole process. She didn't wipe her sweat off until finishing the live broadcast. "I feel that making connections with people during livestreaming is important. It's just like teaching when you make connections with students. Also, being warm and genuine works for me, and the art of sales are important in this job as well," Amy said.

Amy imparted me some of her sales tricks after lunch. Sometimes customers shared good news with Amy, like finding a new job, or having a girlfriend. Amy would take a quick look at her sales notes hanging all over the wall in front of her to choose the crystals said to have the corresponding meanings. She would then present them to the customer and said congratulations to him or her. "These are believed to be able to bring good luck to your job or to your friend. I do hope your good luck will stay." Most of the customers would be pleased and cheered. If not, they did want fun and were happy with whatever were scooped out.

As for the sales notes, or cheat sheets as she joked, she shared a funny story happened in her livestreaming. Once a gentleman gave some negative comments on her performance after he saw her notes on the wall... "Hey, you are cheating!" he said. Amy laughed and replied "Yes, of course I am. You should be glad that I am giving you the correct information instead of making things up!" Amy enjoyed laughing with people during the livestreaming. "That's part of what makes it fun. I find it amazing about the amount of knowledge I'm learning about crystals. All of them come from the Donghai County, Jiangsu Province."

Amy reflects on her live broadcast after each livestreaming and takes down the good parts and unsatisfactory parts. Every day she meets with her colleague, the operator who runs her livestreaming to talk about the broadcasting skills and their effects. Amy said that they are learning from each other, and working together very well. As for the big career jump, Amy said it has been so much fun to change. "I'm learning new things again, and because it is a change, it has filled me with energy to my job well."

"Amy learns quickly, and she is very suitable for this job because of her affinity. Actually, we want to get more out of her. She can help training anchors. Finally we hope that she can become an E-commerce expert."Amy's boss Jason thinks highly of her.

Jason said that as a capital of E-commerce, Hangzhou has an absolute advantage. As for the cross-border E-commerce, Hangzhou has the advantage of talents. There are currently almost 10 foreign employees at the Trend Base, who are from Australia, New Zealand, America, Romania, South Africa, Lithuania, etc., selling a variety of commodities including wigs, crystals and clothes online. The Trend Base is expanding and welcomes more internationals to join its team.