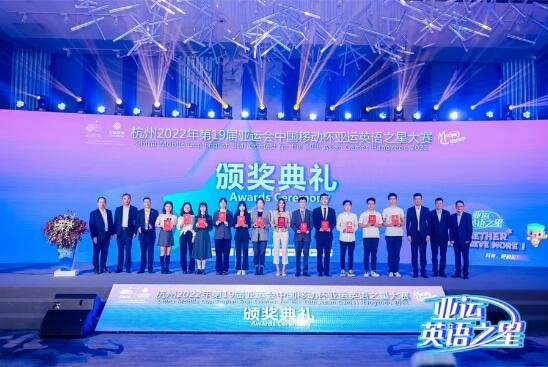 The awarding ceremony for "China Mobile Cup English Star Contest for the 19th Asian Games Hangzhou 2022" was held in Hangzhou on September 20. The contest has attracted nearly 50,000 participants from over 30 countries and regions around the world and finally produced the champion, the runner-up and the second runner-up for the college group, public group and international group respectively.

It is reported that participants with outstanding performance in the contest will have better chance of being selected as volunteers, especially specialized volunteers, of the Asian Games and Asian Para Games under the same conditions. The champions, runner-ups and second runner-ups of three groups will be shortlisted for the National Semi-final of "21st Century Cup" National English Speech Contest 2022.

To inspire the whole society's enthusiasm for participating and serving the Asian Games, the organizer specially showed the video recording exclusive interview with Jin Xiaoyu who is known as the "talented translator". In addition, the awarding ceremony specially invited many sports champions including Wang Shun and He Bingjiao to share their stories about the Asian Games via online and offline interaction, with a purpose to encourage citizens to participate in and serve the Asian Games and narrate the wonderful Chinese stories to the world.