An interview with Mr. Vinod Kumar Tiwari,President of the International Kabaddi Federation 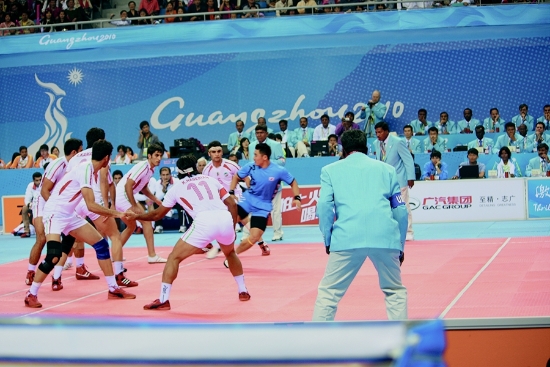 As an event on the Hangzhou Asian Games, kabaddi is not a familiar name to most people, although it is an ancient, mysterious, exciting and popular sport. The President of the International Kabaddi Federation, Mr. Vinod Kumar Tiwari, recently accepted an exclusive interview with a journalist from Hangzhou 2022 and introduced this unique Asian Games event in detail.

Kabaddi originated from a folk sport in Asia and has a history of more than 4,000 years. It is very popular in West and South Asia.

"Kabaddi is probably one of the few sports where you don't need any equipment," Vinod said. "All the game needs is 14 athletes and a small court sized 13 by 10 square meters."

The game is played between two teams of 12 players, seven on the court and five substitutes. At the beginning of the game, the players of both sides stand in their own half and decide which side attacks first. The first attacking side sends a player to the other half to attack. If the attacking player touches one or more players of the defending side and returns to his/her half, he/she will score one point for each player he/she has touched. The touched ones in the defending team will be off the game. Meanwhile, the attacking team can bring one player who has been sent off the court (seven in the game as the upper limit) back to the court with a point it has won. If the attacking player fails to return to his/her half, he/she is sent off until his/her teammate earns enough points to bring him/her back to court. For each player who fails the attack, the defending team scores one point.

The two teams take turns to attack. The whole game is divided into two 20-minute long sessions with a five minute halftime break. The team with a higher score wins. If the two teams are tied in the regular time, the game will be prolonged.

According to the detailed rules, it is actually a game similar to the Chinese "eagle catching chicken" game, except that it has higher physical requirements for the players, for example, agility, lung capacity, muscle coordination, quick reaction and so on.

A kabaddi dream of going international

The kabaddi game is expected to produce two gold medals at the Hangzhou Asian Games.

Vinod said that kabaddi had a long history of development and has made a remarkable appearance in modern sports.

Kabaddi made its debut as a demonstration sport at the 11th Olympic Games in Berlin in 1936. By 1985, kabaddi was included in the South Asian Federation Games, now known as the South Asian Games, and thus entered the international arena.

"Kabaddi made a big breakthrough in 1990 when it was included in the Beijing Asian Games. At that time, the Asian Kabaddi Federation was responsible for its competition in Asia."According to Vinod, after that, the women's kabaddi became an official event at the 16th Asian Games in Guangzhou in 2010.

With the ambition of promoting the sport to the whole world, the International Kabaddi Federation (IKF) was formally established in Mumbai in 2004, joined by some Asian countries as well as some countries of other continents that are interested in the game. From then on, IKF has been dedicated to promoting the sport around the world.

"At the beginning, there were about 15 countries involved, including the UK, Germany, the West Indies, Canada, and so on." So far, IKF has 31 members, Vinod said. Israel and Cameroon are the latest countries to show interest in the game.

Through the joint efforts of IKF and Star TV, the Kabaddi Professional League has even attracted participation from overseas players, and thus expanded the global player pool of kabaddi.

"All this is attributed to the vision of the former IKF chairman Mr Janardan Singh Gehlot during his tenure. His efforts led to the development of the game around the world. Now kabaddi has become a permanent sport of the Asian Games." The IKF's goal is to make kabaddi included in major sporting events, including the Olympics, Vinod said.