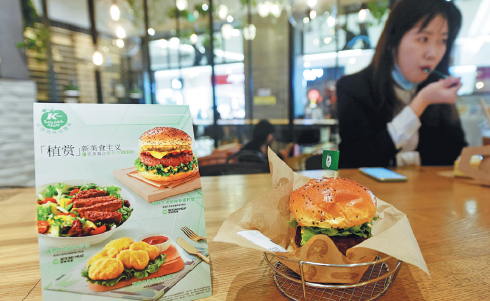 Burgers made with artificial meat on sale at a KFC outlet in Hangzhou, Zhejiang province, in October. [Photo by Long Wei/For China Daily]

Investing in plant-based alternatives to meat leads to far greater emissions reductions than green investments in other sectors, including construction and transport, according to a new study.

Every $1 trillion invested in plant-based proteins is equivalent to 4.4 gigatons of carbon dioxide savings, said an international team of researchers for Boston Consulting Group, or BCG, and Zurich-based Blue Horizon, a private equity firm that focuses on sustainable food systems.

These emissions savings are 11 times greater than those achieved via equal investment in zero-carbon car technology, around three times greater than investing in green cement and sustainable steel, and seven fold the savings garnered from energy efficiency investments in buildings, the study found.

"Protein transformation is the most capital-efficient way to avoid emissions," said Bjoern Witte, chief executive of Blue Horizon. "Future generations will benefit greatly from the demonstrable impact this will have on the environment, as shown through our analysis of climate data."

The food system accounts for 26 percent of global emissions, with 15 percent coming from animal agriculture, which is on a par with the transport sector. A growing number of nations have committed to promoting low-carbon forms of protein, in an effort to cut CO2 and methane emissions derived from animal husbandry.

The United Kingdom government food strategy, published last month, includes a commitment to fund innovations in alternative proteins, such as processed meat substitutes, and support the expanded production of more sustainable forms of protein, including beans and pulses.

In the 14th Five-Year Plan period (2021-25), China acknowledged the need to "expand beyond traditional crops, livestock, and poultry to more abundant biological resources". In January, "future foods" such as cultivated, or lab-grown, meat were included in China's five-year agricultural plan for the first time.

Ben Morach, who is managing director at BCG, said that switching to alternative and sustainable sources of protein both tackles emissions and removes risks from the supply chain.

Due to rampant inflation, food prices have risen an estimated 37 percent year-on-year, according to the World Bank, leaving the planet on the precipice of a nutrition and food security crisis.

Morach said that pivoting away from animal-based proteins will lead to shorter, more resilient, and potentially more local supply chains.

"Nearly one in three people across the world are plagued by food insecurity. Coupled with the impact of the continued geopolitical crises on the supply chain and food prices, there is immense pressure on the global food system," said Morach. "Widespread adoption of alternative proteins can remove the risk of supply chain disruptions and play a critical role tackling climate change."

BCG also provided a preview of consumer surveys conducted in China, France, Germany, Spain, the United Arab Emirates, the UK, and the United States, which are due to be published later this month. In the survey, around 30 percent of consumers named climate change as the primary reason to switch to alternative proteins.

Approximately nine out of 10 said they like at least some of the alternative-protein products they have tried, and consumers in China and Germany are the most willing to pay close to parity with protein equivalents. No consumer in any region is willing to pay a premium for alternative proteins that match meat for taste, texture, and nutrition, according to the survey.