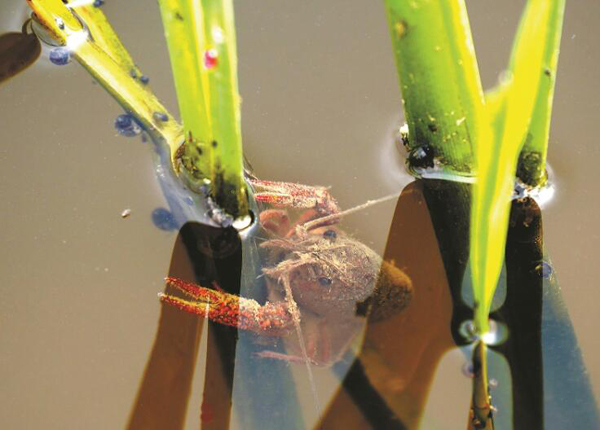 A crayfish is raised in a rice paddy in Xiaoshan district, Hangzhou. [Photo by Zheng Chengfeng/hangzhou.com.cn]

The rice-fish farming system in Xiaoshan district, Hangzhou is not only benefiting the environment but also local residents, Hangzhou Daily reported on June 13.

According to Wu, crayfish raised in rice paddies are more popular among consumers as they are environmentally-friendly – the crayfish waste can add natural fertility to the soil and hence promote an increase of rice yields.

"The lands used to be used only for growing rice and had relatively low economic benefits. The co-farming model has inspired me and I'm planning to implement it over another 26.7-hectare of land in the latter half of the year," Wu said.

Wang Linhuan, who has been engaged in the aquaculture industry for over 40 years, is also rolling out co-farming plans on the 134-hectare land. He said he will take steps to explore rice-shrimp, rice-turtle, and rice-fish farming models.

"We plan to bring in a variety of agricultural, cultural and tourism projects, such as study trips, to further stimulate the vitality of rural development," Wang said.

As an efficient, profitable, and environmentally-friendly way of farming, Hangzhou has applied it over more than 733 hectares of land. By 2025, the city is expected to realize an average yield increase of more than 50 kilograms of aquatic products per mu (0.067 hectare) and more than 500 kg of rice per mu, increasing income by more than 2,000 yuan per mu.