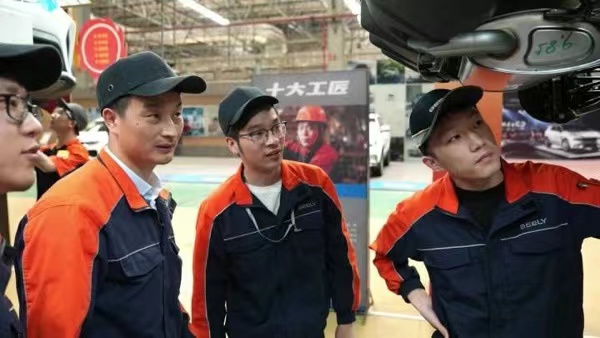 "Not taking shortcuts is the best shortcut," Lyu Yicong, a delegate to the 15th Communist Party of China (CPC) Zhejiang Provincial Congress and assistant to the general manager of Geely Automobile Zhejiang Fulin Guorun Auto Parts Company, often used these words to encourage himself.

"May 20 marks the 18th anniversary of my joining Geely," pointing to the thick stack of management books on the desk, Lyu said that he has been in the process of continuous learning for the past 18 years, and now he is moving towards management.

In 1994, Lyu joined Geely Automobile Road and Bridge Company as an auto assembler. Coming from the rural area, he had long had a wish, that is, to assemble a car independently. To this end, he taught himself the electrical schematic diagram of the whole vehicle and read textbooks prepared for undergraduates, and also asked to repair a faulty car that others did not want to touch. Soon, he mastered the workings of more than 1,200 auto parts. Not only could he independently assemble a complete vehicle within two days, but he could also accurately identify more than 40 kinds of fault sounds by just listening to them.

"I was single at that time, and I had more spare time," Lyu said with a smile. In fact, now married with two children, he always loses track of time once he gets lost into work.

In 2020, the engine transmission line of the assembly plant was digitally upgraded. Lyu took over the task of transforming the engine and gearbox processes. It was a task that demanded high precision, and a slight deviation would cause damage to components of the assembly line. Lyu worked day and night for three months, virtually living in the plant. The digital transformation was completed successfully as scheduled.

"Do what you want to do and do it well, it's called growth." The slogan on the steps of the office building is exactly the portrayal of Lyu's career. Over the years, he has won many honors such as the China Youth May Fourth Medal and the National Model Worker.

Lyu, who will be 40 soon, is full of confidence about the future.