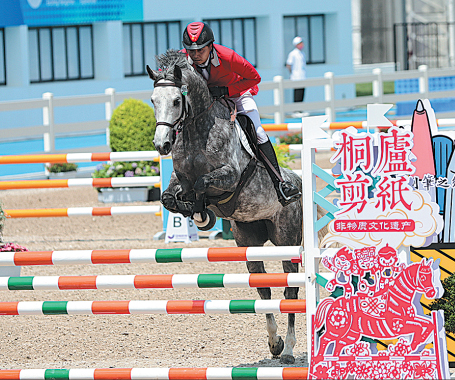 Born and raised in Jiaxing, Zhejiang, Zhang became the first equestrian rider from the province to compete at the Olympic Games in Tokyo last year, and in 2019 won the Chinese Equestrian Jumping Championships Team Finals.

"Riding at this venue has been a great experience, especially the cross-country track. The horse and I worked well together," said Zhang, who as someone with a rich experience of international competitions was mightily impressed by the state-of-the-art venue.

Tonglu Equestrian Centre was due to host competitions for the 19th Asian Games Hangzhou this year before that event was postponed due to the pandemic.

The success of last week's event demonstrated how the venue is perfectly equipped to stage elite competitions in the future. The event featured jumping, dressage, and eventing competitions, with around 1,600 spectators watching the action.

"Equestrian is the only sport at the Asian Games that requires people and horses to compete together. The main objective of this invitational was to ensure that the venue was up to standard for the horses," said Jiang Guijiao, executive director of venue operation and maintenance.

The horses in action last week were all from stables in Zhejiang. However they still went through the same quarantining procedures that horses from abroad would be subject to.

The transportation of the horses incorporated procedures such as on-site quarantine, comprehensive disinfection, and the issuing of animal quarantine certificates by the agricultural department.

Zhong Genxiu, the head of inspection and quarantine supervision at the venue, revealed that staff had completed three sterilizations on the stables 10 days before the horses arrived.

Staff measured the temperature of horses twice a day and monitored and recorded their health condition.

To ensure the horses were as comfortable as possible, 96 kinds of stable-specific materials were provided, including ice machines, saddle racks, special waste bins, flatbeds for transportation, and disinfection supplies.

Tonglu Equestrian Centre will serve as China's national equestrian venue, as a research and training base, and provide services for other horse-related cultural and tourism industries after the Asian Games, according to Zhou Haijing, executive deputy commander of the venue's operation team.

Fang Xiaoying in Tonglu contributed to this story