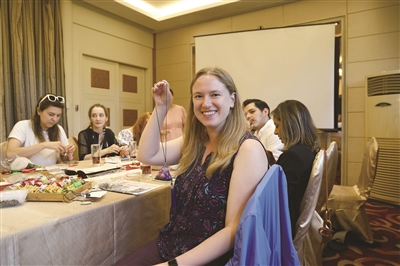 Katherine was quite satisfied with the purple sachet she made herself.

As a newcomer to China, arriving only late last year, it has been a challenging time to get to know this wonderful country and its people in the midst of the COVID-19 pandemic. I was intrigued when I saw that a holiday was approaching with the interesting name "Dragon Boat Festival." So I signed up for an event presented by Hangzhoufeel to learn more about the festival. It was held at the City God Pavilion on Wushan in the West Lake Scenic Area. We were warmly welcomed, guided to the venue and introduced to the history and traditions of the festival.

It is held on the fifth day of the fifth lunar month and is one of the most important and famous traditional Chinese festivals. One of the stories surrounding its origins is that it is to commemorate the death of Qu Yuan, a famous patriotic poet, who threw himself into a river at the demise of the Chu kingdom. It is said that the local people paddled out in boats to recover the body and threw lumps of rice in the river to keep the fish from eating the remains. This is the origin of the customs of eating sticky rice dumplings and dragon boat racing. Another important aspect of the festival is the focus on warding off disease in the unlucky fifth month when poisonous insects start to emerge and illnesses and natural disasters strike. People put calamus leaves and wormwood on their doors to keep pests away. This is the origin of the other important custom of wearing sachets filled with fragrant herbs or perfumes around the neck or tied to a garment to ward off evil and insects.

The friendly organizers ensured we were taken care of with hot tea, snacks, and a lunch of traditional sticky rice dumplings. The main event was the sewing of sachets filled with aromatic herbs to ward off insects. Many different patterns and colors of fabric were provided and the participants had fun sewing up the pretty little sachets and stuffing them with the sweet -smelling and insect -repelling herbs. I decided on the classic pyramid shape. The rectangle of fabric is folded in half and two sides are sewed closed which leaves one opening. Then the bag is turned inside out so the pretty side of the fabric is on the outside. It is filled with fragrant herbs, and a tassel and carrying strap are anchored inside. Instead of sewing the third side closed to make a pillow shape, the seam is rotated at a ninety-degree angle to be sewed shut. This creates a pyramidal pouch with a tassel on one corner and the carrying strap coming out an opposite corner. My sachet had a purple fan pattern with a nice purple tassel and green strap. We compared techniques and helped each other to complete the project, resulting in many delightful sachets and smiling faces. The day was topped off by enjoying a stunning view of the West Lake from the top of the pavilion and snapping some commemorative photos. What a lovely way to be introduced to the Dragon Boat Festival!