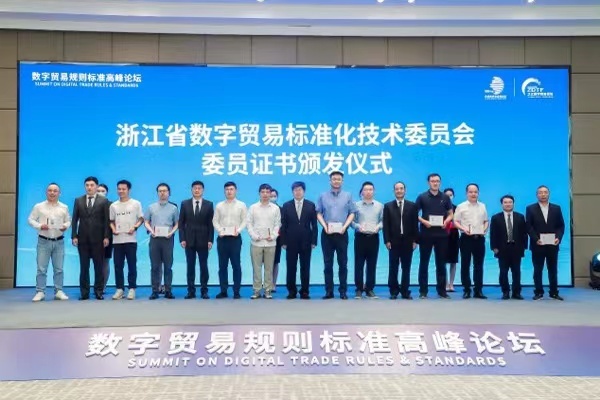 Certificate issuance ceremony at the Summit on Digital Trade Rules and Standards. [Photo/zjol.com.cn]

The Summit on Digital Trade Rules and Standards was held in Binjiang district, Hangzhou, capital of East China's Zhejiang province on Tuesday.

During the forum, representatives from Digital Economy Partnership Agreement (DEPA) member states and the International Standardization Organization, as well as experts and scholars from the China Academy of Information and Communications Technology, the China National Institute of Standardization and other associations discussed topics such as DEPA, the development of the global digital economy, and international digital trade standards.

The first digital trade standardization research report and the first standard in the field of digital trade in China were also released at the summit.

Zhejiang is the first province in the country to issue a digital trade policy document and start on the construction of a digital trade pilot demonstration zone. In 2021, the value of imports and exports in the province surpassed 480 billion yuan ($71.69 billion).

At present, digital trade has become a new engine driving global economic growth. As such, establishing global digital trade rules and standards will serve to further promote innovation and development and enhance competitiveness in the international market.