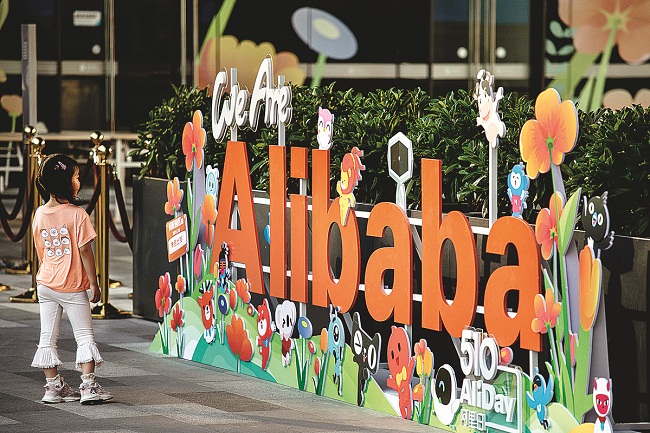 A girl stands in front of the Alibaba Group Holding Ltd headquarters in Hangzhou, Zhejiang province, in May. [Photo/Agencies]

Alibaba, which is also listed in Hong Kong, saw its shares surge 12 percent in Hong Kong on Friday after the e-commerce giant said its revenue rose by a better-than-expected 9 percent for the quarter ended March. Its adjusted net income, however, fell 24 percent year-on-year.

Both indicators were slightly higher than analysts' estimates in S&P Global Market Intelligence. But the revenue growth was a far cry from the usual 40 to 50 percent quarterly reading just two years ago, and marked the mildest expansion since the 2014 IPO.

"Despite macro challenges that impacted supply chains and consumer sentiment, we continued to focus on customer value proposition and building the capabilities to deliver value," Chief Executive Daniel Zhang said in a prepared statement. "We saw tangible progress across our businesses, especially in operational improvements in key strategic areas."

Revenue from its core e-commerce business, which refers to its Taobao and Tmall platforms, leveled off last quarter as the total value of goods sold on them fell by low single digits from a year earlier. It also attributed a drop in gross merchandise sales in March to the impact of COVID-19.

Some experts said the results appear to be "raising the likelihood of a speedy recovery" of the internet giant's retail and consumer units by the September quarter, assuming COVID disruptions in China fade.

"The company can stanch its slide if virus cases drop and cause restrictions to be lifted, spurring a rise in buying sentiment by fiscal Q2," said Catherine Lim, analyst at Bloomberg Intelligence, in a research note.

Yet the company did not offer its usual revenue forecast for the coming fiscal year, citing "risks and uncertainties" arising from COVID-19 that make precise predictions difficult.

A key to reviving business is to salvage consumer power as their willingness to spend remains sluggish at home. As such, the company is busy prepping for the upcoming June 18 or "618" shopping festival, with easier customer access to discounts and preferential loan services dedicated to merchants to boost transactions.

Shoppers are entitled to 50 yuan ($7.46) off on purchases of 300 yuan or more, and they stand to enjoy the perks from Tuesday. Vendors can enjoy up to 20 percent off on credit loans, with Taobao and Tmall providing merchants with a free early payment service worth 100 billion yuan.

"For '618', merchants have started preparations and view it as a good opportunity to recover losses incurred in April and May," said Alicia Yap, analyst at Citigroup Global Markets Asia.

But she also noted that the impacts of the complex macro environment on consumer spending habits include stronger demand for staples and growing price sensitivity to discretionary products, which the Alibaba management views as "the key to the recovery of China's retail industry".

It is essential to restore consumer confidence as COVID-induced lockdown in Shanghai has dragged consumption down 20 percent year-on-year in April alone in the city, said Jason Yu, general manager of consultancy Kantar Worldpanel in China, citing data tracked by the company.

"While we may expect some pickup in May and June, the overall second quarter could still be challenging," he said.

Beijing has called for more supportive measures from bailing out small businesses to extending merchant subsidies to ramping up consumption as the resurgence of COVID outbreaks across the country since March weighed on consumption outlook.

City-specific policies are being rolled out. For instance, Shenzhen is introducing a slew of subsidies to get people to make big-ticket purchases-such as spending up to 10,000 yuan on new energy vehicles and 15 percent off on certain consumer electronic products.