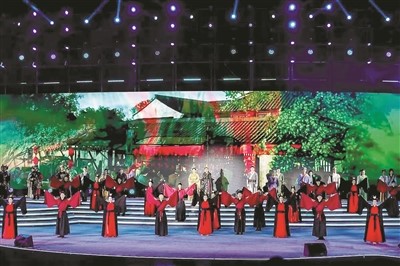 With the theme of “a flowering path leading to happiness”, the First Wuyue Culture Festival was launched on the evening of May 18. Audiences on the site were mesmerized by Musical Drama Wuyue Style that revived the prosperous scene of Wuyue Kingdom. The festival also witnessed the establishment of Wuyue Culture Research Center and selected six ambassadors of Wuyue Culture. Yesterday, experts and scholars gathered together to discuss the value of exploring the history and culture of Wuyue Kingdom in the contemporary era.

Next, Lin’an will build a cultural bridge to connect the past with the present based on “Wuyue Culture Festival”, intensify efforts to protect and carry forward King Qian Culture of Wuyue Kingdom and step up the construction of Wuyue Kingdom Mausoleum Archaeological Site Park, a cultural landmark of the city. Lin’an will exert efforts to launch excellent works regarding King Qian Culture, such as TV Series Legends of Wuyue Kings, Opera Impression of Wuyue and Historic Series King Qian of Wuyue, and make its contribution to enriching the heritage project of “Elegant Song Culture”.