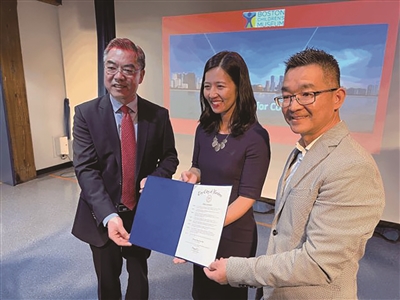 Boston-Hangzhou Day was celebrated in Boston

To mark the 40th anniversary of the Boston-Hangzhou Sister City Partnership, Boston in the United States celebrated Hangzhou Day on May 1.

The celebration was held at the Boston Children's Museum with traditional Chinese performances, including lion dance, hanfu dance, folk instrument performances and an exchanging of gifts. Yue Opera songs also hit the stage.

The first Asian American to hold office in Boston, mayor Michelle Wu, proclaimed the Boston-Hangzhou Day during the event. "We want to ensure that this continued partnership and collaboration and uplifting of the work always centers around our history," said Michelle.

Chinese ambassador Huang Ping, the consulate general of the Chinese Consul in New York delivered a speech for the remarkable occasion, "Sister city relationships are very important to enhance cities' friendships and the subnational cooperation between China and the US."

"Some 7,000 miles across the world, a Chinese city bears a striking resemblance to Boston. It features a major port, is home to a flourishing biotech industry, rife with universities and young professionals." Just as an article in the Boston Globe reads, the two cities are alike in many aspects.

The sister-city relationship between Hangzhou and Boston was established on May 1, 1982.

In 2014, the Boston Children's Museum sponsored an exhibition named "Children of Hangzhou", allowing visitors to meet everyday children from the city in "distinctive Chinese settings".

This time, an exhibition also kicked off at the Museum on the second floor where collections shipped from Hangzhou are on display including couplets, calligraphy works as well as Mascots for the Hangzhou Asian Games. It will run through the month.

"This celebration demonstrates the power of cooperation and collaboration, which we need more than ever," said Carole Charnow, the museum's president and CEO.

"Hangzhou, generally regarded as China's most scenic city, was described by Marco Polo as 'Paradise on Earth'. From this perspective, it is easy to see why Boston and Hangzhou have so much in common. Designated a special trade zone by the Chinese government, the City of Hangzhou is now seeking to strengthen the economic ties with Boston." According to the official website of Boston.