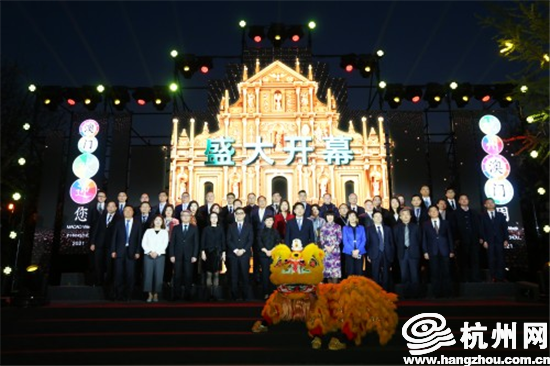 “Hangzhou Macao Week” has begun on the evening of 26 March at the Hangzhou Hubin Pedestrian Street in radiant splendor. The event is held by the Department of Economy and Finance of the Government of the Macao Special Administrative Region, partnering with the Hong Kong & Macao Affairs Office of the People’s Government of Hangzhou Municipality, Hangzhou Municipal Bureau of Culture, Radio, Television and Tourism as well as the Hangzhou Shangcheng District People’s Government. Large-scale road shows and performances with Macao characteristics are to be staged at the Hubin Pedestrian Street from 26 to 29 March to showcase Macau’s diverse and impressive elements of tourism, trade, culture and entertainment, to display rich connotations of Macao as a world center of tourism and leisure, to promote Macao as a healthy, safe and quality destination, and thereby to attract more mainland tourists to Macao for travel and consumption.