"It's not my first time spending the Spring Festival in Hangzhou, but definitely the best one." Eric Mupona from Zimbabwe couldn't hide his joy when heading back to his apartment on Jan 24.

Before that, Eric spent fabulous 24 hours in Wangfu Township, in the city's Chun'an County. He shared his experiences on his social media accounts and harvested many likes and reposts by both Chinese and internationals.

The series of events is collectively called "Enjoy the Spring Festival in Hangzhou by following the foreign expats". Hosted by Hangzhoufeel, two have been concluded to date, while more events are yet to go. They are said to bring out the New Year traditions that even many Hangzhounese have never seen.

Eric found himself at home in Wangfu Township 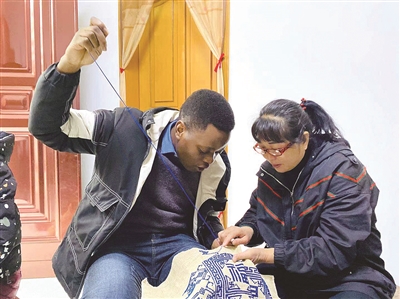 The news "there came an international friend" quickly spread from one village to another in Wangfu. Local people were curious to come across with Eric, probably the first foreign visitor there.

Ms. Wang received Eric with a pork feast made from a home-raised pig. At the Wang's, more tables were added, spilling out into the yard. Such banquets are frequently seen at this time of the year, where friends and relatives are invited to come over to celebrate a wonderful year.

When at Granny Wen's kitchen, Eric jokingly said he had just set foot in a misty fairyland. The bubbling water meant the hand-ground soybean mixture in a sack was ready to be strained and then sealed.

Now it's time to extract the soy milk! The sealed sack worked as a filter making the collected milk smooth and creamy. Eric was simply overwhelmed by this fresh taste, so mellow and natural that he tossed off a bowl of milk in one sip.

He didn't want to leave until the diluted gypsum gradually made the soy milk curdle, and heavy stones pressed over the wrapped curd to form tofu; nor did he missed out making every traditional local food.

Frying rice balls stuffed with sweet bean paste was fun; making crispy rice candies, some delicious sweet cubes mixed by cooked rice, walnuts, sesame, and melted honey and sugar, as Eric recalled, was the most satisfactory experience. Later he sold a lot of the cubes in the livestreaming to promote the local Spring Festival Products.

"Eric, do you know that over 220 thousand audience is watching us simultaneously?" exclaimed by the partner anchor at the unbelievable figure 20 minutes after Eric joined. More astonishing was how well Eric depicted the story behind the Badu embroideries. Eric proudly explained that he learned from Master Wang that morning.

Ms. Wang Fengzhu is the inheritor of this provincial intangible cultural heritage. Her 21-meter long, 20 patterned Badu Long Scroll has brought the critically endangered craft back to the spotlight. "When you walk into these patterns, you walk into each historical story." Ms. Wang was more than happy to teach Eric the techniques, and even happier to see such a cultural heritage being valued by the internationals.

A ride with Thomas to Maotang Village 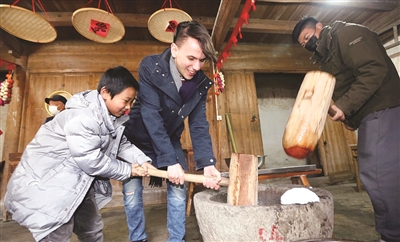 One week after Eric took over the square dancing with a group of "aunties" in Wangfu township, Thomas Chapman from the UK held a mini "concert" in Yuhang County's Maotang Village for the villagers and thousands of viewers via livestreaming.

Thomas sang beautifully the song Do You Wanna Build A Snowman from Disney's Frozen as he waved the paper-cutting snowflake in his hand. The next song She Will Be Loved from Maroon 5, was co-performed with a local singer who was singing toast songs.

Some 10 days before the Spring Festival, the village looked just as if it had already been switched to the New Year's mode.

Along with the smoked pork and sausages hung under the eaves are the red lanterns. They are seen everywhere. "The lanterns in the Chinatown in the UK could never compare to the ones here," said Thomas. "They've painted the village all red!"

His eyes couldn't get away from the mascot, a mythical dragon headed fish carrying two pears. The local people intelligently combined their provincial intangible cultural heritage, the handmade dragon headed fish lantern, with its famous pears as the new local IP cartoon, and printed it in the local products sold in the bazaar.

Like Eric, Thomas also had chances to make traditional food. In Maotang village, you can't miss pounding rice cakes, a process Thomas commented on his social media as "the best forearm workout ever" -- after placing the steamed sticky rice powder into a vat, the rice cake was hammered hard repeatedly until it became chewy.

Sticky rice cake, or niangao is a homonym for "higher year". "Which explained this delicacy the most popular during the Spring Festival, thought to wish one more prosperous in the coming year." said the Workshop owner.

"Very peaceful," said Thomas. "The old and cute alleys gave me a sense of calm as I was offered a glimpse into traditional Chinese culture."

What does the Spring Festival mean to you? How and where would you celebrate it? Share your valuable experience to Hangzhoufeel@126.com, and keep tuned with the upcoming events!