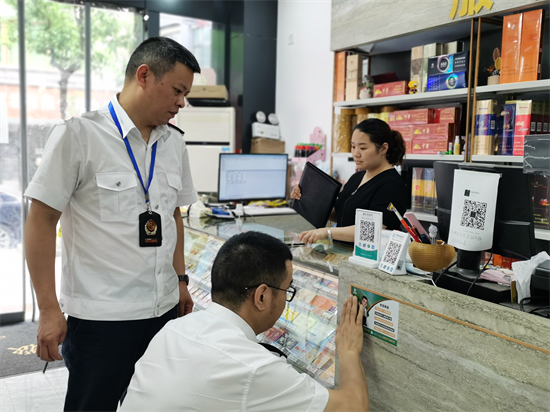 Officers of China Tobacco put up a public service announcement in Hangzhou, East China's Zhejiang province on May 31. [Photo.hangzhou.com.cn]

Cigarette retailers In Hangzhou, Zhejiang province were encouraged not to sell cigarettes on May 31, which marked the 34th World No Tobacco Day.

Tobacco causes 8 million deaths worldwide each year. About one in every three cigarettes smoked in the world is smoked on the Chinese mainland. Smoking causes about 2 million deaths each year.

The percentage of Zhejiang residents who are exposed to second-hand smoke currently stands at 57.15 percent, while the percentages of the province's adolescents who have attempted smoking and who have become regular smokers are 8.93 percent and 2.1 percent respectively. These figures represent a decline compared with previous years and are far below the national average.

Zhejiang has set a target of reducing the smoking rate among people aged above 15 years old to 20 percent by 2030.

To attain this goal, Zhejiang authorities have so far opened 117 clinics offering outpatient services with regard to smoking cessation.

Zhejiang authorities have also been strengthening the monitoring and preclusion of tobacco use among certain groups of people, such as medical doctors, teachers, civil service workers, and schoolchildren.

Moreover, the government is constantly sharing information regarding smoking-induced hazards and imposing smoking bans in various public sites to create a smoke-free society.