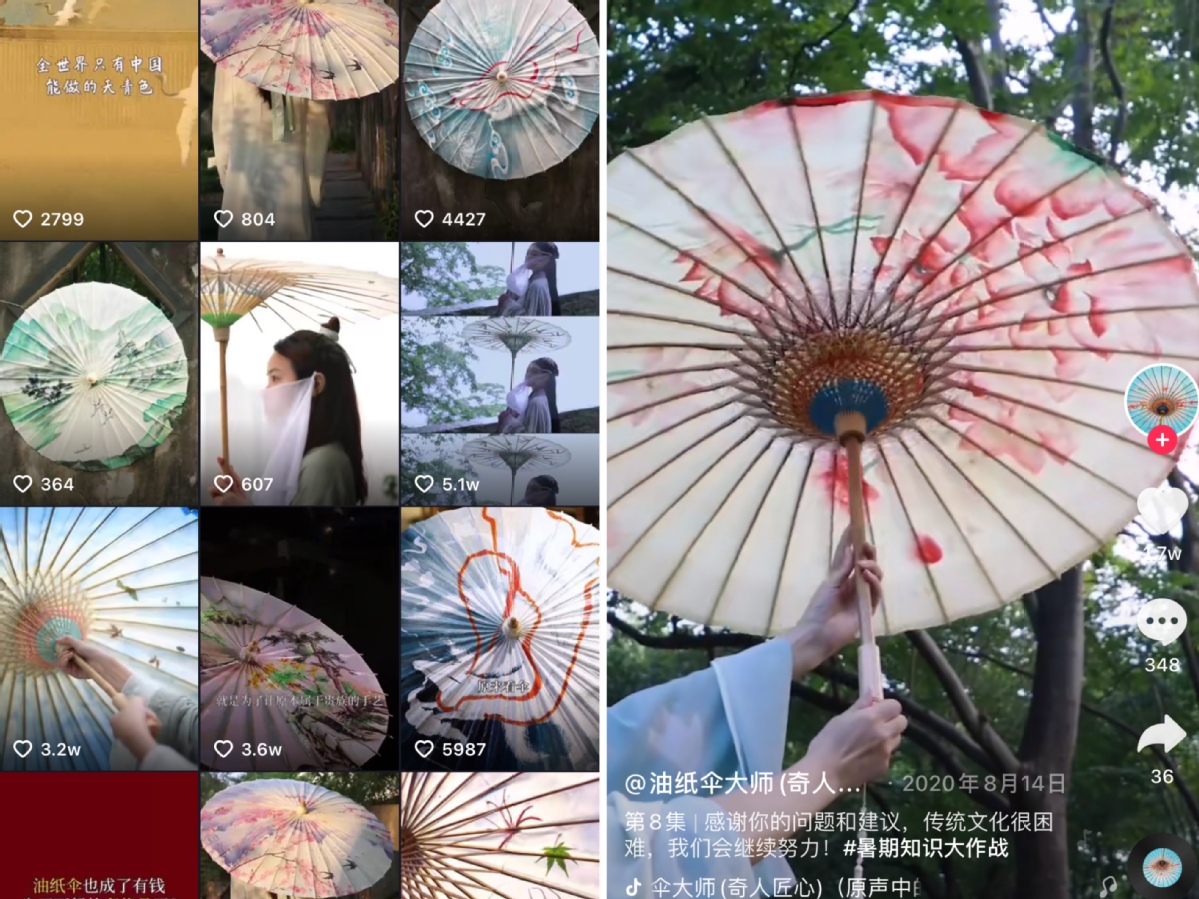 HANGZHOU - Wen Shishan, 57, wandered in a bamboo grove, holding a machete in search of ideal materials to make oil-paper umbrellas, an old craft dating back to over a millennium ago.

Situated in Hangzhou, capital of East China's Zhejiang province, Wen's workshop boasts more than 800,000 fans on the popular Chinese short-video platform Douyin. The digital renaissance of the ancient handicraft can be traced in part to Zhang Jianhua, a short video maker born in the 1990s.

In 2018, Zhang began to help Wen film the production process of the oil-paper umbrellas, driven by a fierce reluctance to let the fine art vanish into thin air.

As Wen and his delicate artifacts flicker across hundreds of millions of smartphone screens, the old master feels increasingly heartened. "For the first time in my over 30 years of making the umbrellas, so many people are taking an interest in the craft. The life of craftsmen like me changed beyond recognition thanks to the Internet," Wen said.

In the digital era, master craftsmen have increasingly turned to online channels to promote their craft and earn the social recognition that comes with it, according to Zhao Pu, head of the China Arts and Crafts Center.

In contrast with Wen's unfamiliarity with the internet, Zhao He, a 33-year-old enamel dial maker, feels in command when he introduces details about the dial-making process and shares anecdotes about watches and brands in front of the camera.

Liu Tong, another online celebrity who is a master of paper folding, now cooperates with the World Wide Fund for Nature (WWF) to display endangered wildlife in the form of art. In 2016, Liu made a paper rhino out of a 10-meter-long square sheet of paper in memory of Sudan, the world's last white rhino.

"We want people to realize that today's paper folding art is not merely an ornamental handicraft, but something that can convey ideas, culture and emotions like protecting our environment," Liu said.

"Traditional craftsmen blending with China's livestreaming economy and new retail business models is the current trend," said Zhao Pu, adding that China plans to establish more platforms like forums and universities for the craftsmen to better promote their ancient crafts.

"Everyone hopes that the Internet can help the craftsmen find their niche and allow consumers who are interested in handicrafts to purchase their latest products," Zhang said.