On November 18-19, the 29th APEC Economic Leaders' Meeting was held in Bangkok, Thailand. On November 17, the article titled Asian Games set to highlight China's awe-inspiring city of Hangzhou was released at the official website of Bangkok Post as the local mainstream media of Thailand, and focused on how to implement the "green, smart, economical and ethical" concept of the upcoming 19th Asian Games Hangzhou, looking forward to the "wisdom of Hangzhou" as a contribution to build a Chinese-style modern city for the greatest sports event in Asia.

The article gives Thai readers the brief introduction that Hangzhou is the representative sci-tech city of China, and the digital technology which has been explored and accumulated by Hangzhou for many years has been applied to the construction & operation and use of venues in a multi-dimensional way, so that the people who attend, watch and manage the games can feel the scientific & technological miracle and convenience. 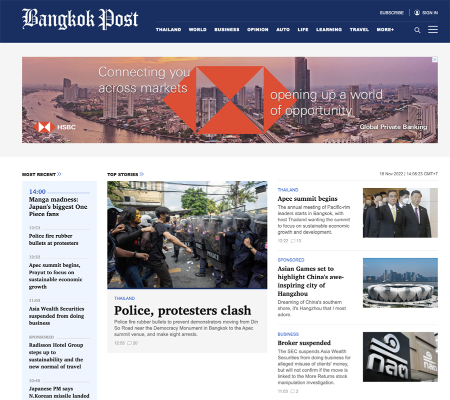 In addition, the article also pays special attention to the implementation of the economical and green & low-carbon concept in Hangzhou. For example, the newly-built venues of the Asian Games only occupy 1/5 of all venues, and the rest are the renovated venues. Among them, most venues introduce the professional teams for operation to maximize the efficiency through specialized management. 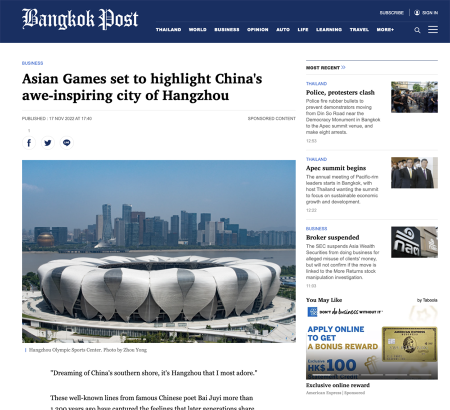 At the end of the article at the official website of Bangkok Post, it fully expresses its expectation that Hangzhou as the model modern city of China would deliver the perfect results of the Asian Games, and describes: "Featured by beauty, elegance, innovation and dynamic, Hangzhou has a long history and culture, with charming natural scenery, advanced digital technology, convenient social service and more hospitable people. The journey to the Asian Games will make you believe that 'Hangzhou is the most impressive'."